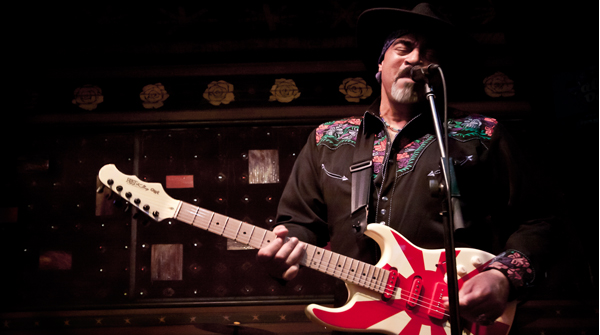 "I am humbled and honoured to inducted into the LouisianaMusic Hall of Fame! So much of America's music and culture startedright here in Louisiana... jazz, blues, rock 'n' roll, zydeco, andso much more. I urge everyone to support the Louisiana Music Hallof Fame. A sincere thanks to [Hall of Fame founder] Mike Shepherd,the Hall and the great music fans of Louisiana!"

Gregg's career began in the '70s, when he began to set the US'ssouthern circuit alight with his incendiary show, but it was afterhis move to Los Angeles in 1980 that things really picked up.Opening shows for blues legends likeAlbert King,Freddie Kingandmany others, Gregg really learned the blues game from the mastersof the genre. He then went on to become a top session guitarist,winning awards, and doing albums and tours with many of pop music'selite - includingMichael Jackson,Mick Fleetwood, and many more.

These days, Gregg tours the world with his own band, and he'srecently worked together with guitar guruTrev WilkinsonandFret-King to create the Fret-King Black Label Corona 'GWR'artistmodel. Built to Gregg's favoured specs, the Corona GWR recreatesthe vibe of the axe he played while on the Michael Jackson Victorytour in the '80s. With a UK retail price of £699, the guitarfeatures Wilkinson hardware and pickups - including the uniqueFret-King Vari-coil control, which allows the player to wind thestacked P90 bridge pickup to absolutely authentic bridge singlecoil - a maple neck and fingerboard, and an eye-catching white andred 'rising sun' finish.

"The GWR is without a doubt the very best guitar I've owned orplayed. The sound, look and feel of it is absolutely killer! What atone! These days, when I go in to do a show or session, I feel asif I'm carrying a secret weapon..."

Gregg is also constantly on tour, and visits the UK in May andJune this year - check out his website for all dates andmore information.