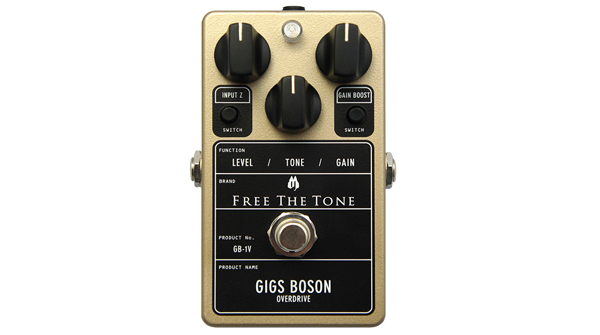 The Free The Tone standard effects are a new series of effects pedals based on the best of technology and extensive experience by the designer who has been building system racks and handmade custom effects for top musicians for many years. These new pedals represent an advance in development standards focusing on every aspect of the design from the state-of-the-art circuitry to the layout of the chassis.

There are many overdrive pedals on the market but Free The Tone set out to make an overdrive pedal that would become a reference for great tone. The player's ideal overdrive pedal is smooth, warm, creamy and harmonically rich, with tons of sustain. The Gigs Boson has all those things in spades. The origin of the name "Gigs Boson" came from the Higgs Boson particle which was discovered last summer. The discovery of this particle could be the first step in elucidating the structure of the universe. We sincerely hope that the Gigs Boson overdrive pedal will become your first step into discovering a world of new tones.

The HTS circuit essentially functions to manage the interface of the effector from signal input to the output. This solves not only the problem with a True-Bypass circuit and the weak point of a combination of a general buffer circuit and an electronic switch, but also totally and effectively manages the interface between effectors connected before and after the effect circuit inside of the HTS circuit.

The compatibility of pedals when they are connected together will be influenced by the signal level and the characteristics of the input and output impedance. The signal characteristics as a result of a combination of true-bypass effectors will be changed every time an effector is switched on or off. The change of signal characteristics will have a drastic affect on the sound quality and/or sound image. You may have felt a fundamental difference in sound quality or a feeling that something just isn't right in the past. This is a major problem of effectors that is relatively unknown.

The HTS Circuit consists of 3 separate circuits: 1. Input Circuit, 2. Noiseless Effect On/Off Circuit and 3. Output Driver Circuit. The Input Circuit receives the signal properly depending on the conditions of the signal source, eliminates noise from unnecessary frequency bands and then sends the pure guitar signal to the effect circuit. The Free The Tone effectors have a very low S/N ratio thanks to the HTS Circuit.

The effected signal is sent to the Noiseless Effect On/Off Circuit. This circuit transfers the guitar sound faithfully without any feeling of dullness or distortion that is often unique to electronic switching circuits, because no switching element, such as an FET, is used. The effected sound signal or bypassed sound signal, selected by the Noiseless Effect On/Off Circuit, is sent to the Output Circuit and then to any other equipment connected after the effector in the signal chain. Regardless of whether the effector is on or off, the signal output impedance remains fixed so that a stable signal is provided all the time. And when the effector is turned off, the HTS Circuit outputs a signal that remains true to the original natural guitar sound.

The effected sound and bypassed sound managed by the HTS Circuit will always have the same sound quality, which solves a problem that has plagued players for years. Please experience the capabilities of the Free The Tone standard series effectors with the built-in HTS Circuit for yourself.