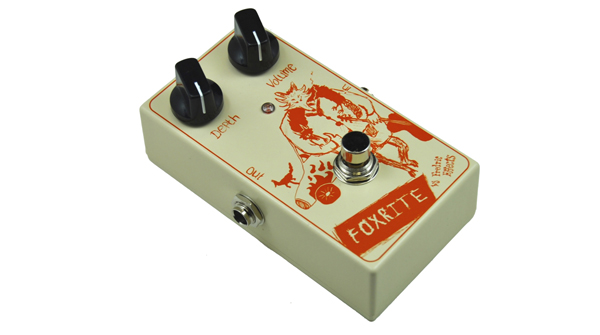 (PRESS RELEASE): The Fredric Effects Foxrite is a modernised version of the late '60s Silicon Mosrite Fuzzrite. It is an exact reconstruction of the original circuit, improved with the addition of a boost stage to bring the volume up to modern expectations. The Foxrite is a uniquely abrasive effect - offering sounds from garagey distortion to full-on octavey, velcro-ripping fuzz.

The Foxrite MkII features a central slider switch, labeled 'Rite' and 'Rong'. This adds greatly to the versatility of the effect. The 'Rite' setting is the vintage correct Fuzzrite circuit, whereas the 'Rong' mode is another popular variation on the Fuzzrite. In this mode, the two gain stages of the circuit are kept in series, and the 'Depth' control acts more like a conventional tone control - from doomy bass to raspy, spitting treble.

The Foxrite is available direct from Fredric Effects and from selected shops and online retailers.