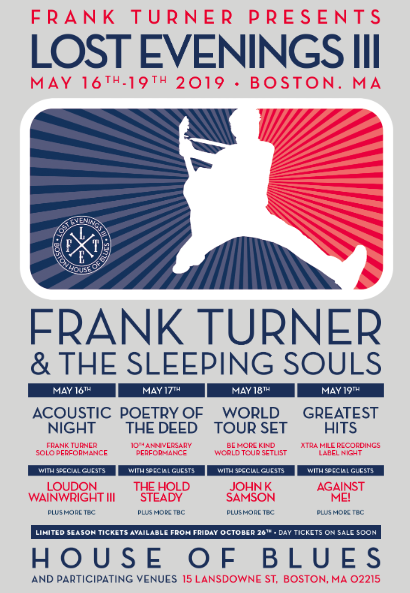 The award-winning multi venue festival comes to Boston for its third year.

Frank Turner’s award-winning Lost Evenings Festival is back for another year, this time making its overseas debut at Boston’s House Of Blues on 16th – 19th May 2019. The 4-day festival (winner of the AIM Best Independent Festival Award in September 2017) will take over the strip of Lansdowne Street opposite the legendary Fenway Park – home to the Boston Red Sox - with events running throughout the day and evening celebrating live music.

The last two years have seen the festival cement its reputation as an event with community and camaraderie at its core. Both years were sold out months in advance, the crowds packing out each satellite event, each stage from start to finish and of course coming together each night to share and rejoice in 4 very different performances from Frank.

Lost Evenings 3 will once again see Frank Turner headline 4 shows in total. The first evening will open on Thursday 16th May with Frank performing a solo acoustic night with the incredible Loudon Wainwright III as main support. Following on Friday 17th May, Frank Turner and the Sleeping Souls will perform his third album ‘Poetry Of The Deed’ in full as it celebrates its 10thanniversary, with the best bar band in the world - The Hold Steady as main support. Saturday 18th the full band brings the recent Be More Kind World Tour set to the audiences supported by singer songwriter and frontman of The Weakerthans – John K. Samson, before returning on Sunday 19th for a rousing Greatest Hits night supported by punk legends Against Me!as part of an Xtra Mile Recordings label and friends night.

There will be the second stage, named as the Nick Alexander Stage, running concurrently across the weekend. Named after the merchandise manager and long-time friend of Franks, who was tragically killed in the Bataclan attack in 2015 – the stage will honour his memory by playing host to some of the best emerging acts – personally selected by Frank Turner.

As with last year, in addition to the evening performances, a selection of panels, masterclasses and workshops will also run during the festival, featuring leading industry insiders, musicians, experts and music professionals offering inspiration, insight and advice to audiences.  The full programme of events will be announced soon.

Speaking about Lost Evenings 3, Frank says: “When the idea for Lost Evenings first came together, the plan was always for it to be a mobile concept, something I could take around the world. After two killer years at home in London, I'm very excited to bring the festival over the pond to my second home, Boston. The House Of Blues there is familiar and friendly territory for me, and the line-up this year might be my favourite one yet. I'm excited to see you all there.”

A full line up and programme of events, including panels and workshops will be announced soon.