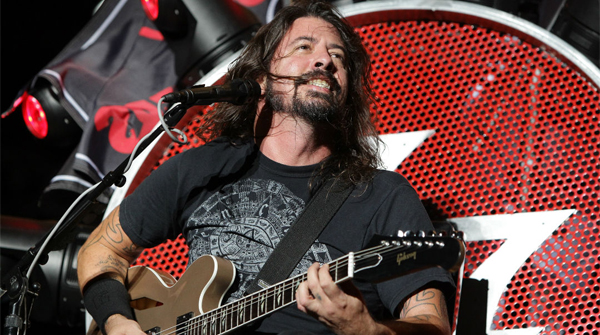 The Foo Fighters performed at Milton Keynes National Bowl on Friday evening a set which featured classics such as "Monkey Wrench", "All My Life" and "DOA" plus covers of Van Halen, Sex Pistols and Yes.

However, it was the Foo's rendition of "Under Pressure" by Queen & David Bowie which really raised the roof (if there was one) as Queen drummer Roger Taylor and Led Zeppelin‘s John Paul Jones appeared on stage to perform.

According to NME, Dave Grohl told the crowd,

“Something nice and special just happened an hour and a half ago. A couple of our friends turned up and we thought it’d be nice to do a song together.”

Following that admission by the former Nirvana drummer, the rock legends were introduced, with Taylor Hawkins giving up the drum stool to Taylor and Jones taking a position behind the keyboards.

“I don’t know if y’all have ever seen a supergroup. This is a ‘superdupergroup.’ I don’t even know what to say because this kind of s— doesn’t happen every day. Let me just tell you that the Foo Fighters, right now, are living out our rock n’ roll fantasy with you tonight.”

The performance on Friday marked the Foo Fighter's first concert in England since Grohl broke his leg during a concert back in June. The injury subsequently forced them to cancel their headline slot at Glastonbury and Wembley Stadium.