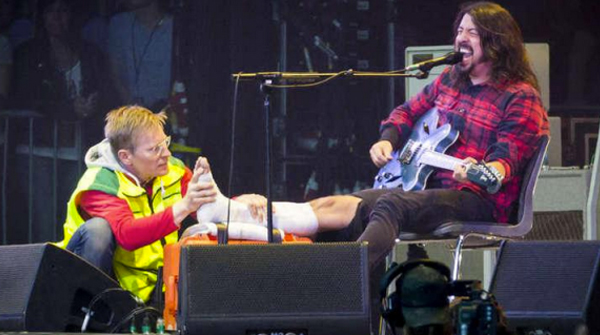 Foo Fighters frontman Dave Grohl cemented his status as genuine rock legend over the weekend after breaking his leg whilst performing. And then returning to finish the show in a leg cast.

The drummer/guitarist fell from the stage during a Foo's show at the Ullevi Stadium in Gothenburg during his usual high tempo performance of "Monkey Wrench" causing the concert to stop for several minutes.

After the stage mishap, Grohl told the crowd:

He continued to play three songs while sitting down before leaving the stage to have a plaster cast fitted while drummer Taylor Hawkins stepped up for Rolling Stones’ "Miss You" and Queens’ "Tie Your Mother Down".

Grohl soon returned with his leg in plaster to declare to a sold out Swedish crowd;

“I want to dance, but I can’t. If I could, I’d dance to this!” before playing All My Life. The band then delivered another 13 songs including Walk, My Hero, Times Like These and Breakout.

He later posted an X-ray of the broken bone on Twitter and said: “Thank you Gothenburg. That was amazing.”

Following the injury the Foo Fighters have now been forced to cancel two European dates at the upcoming Pinkpop festival on June 14 and at the AFG Arena in St. Gallen, Switzerland on June 16.

The remaining four other European dates are expected to go ahead as planned.