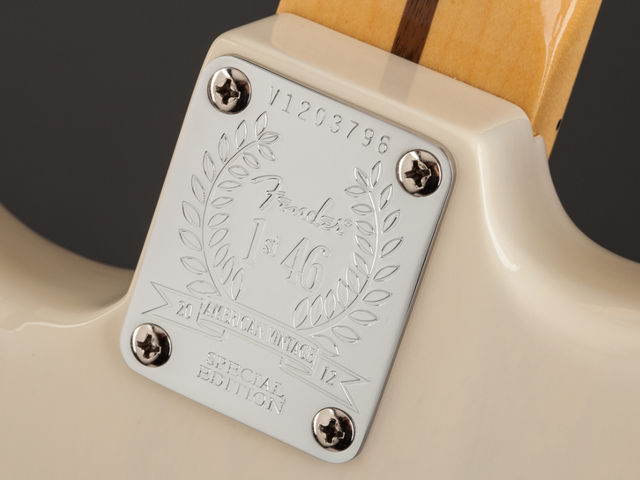 The collectible neck plates will commemorate Fender's foundingin 1946, as well as celebrating the new American Vintage Series,described as Fender's "most accurate and beautiful reissueinstruments ever from key historical years".

The collectable "1st 46" guitars will be randomly distributed,with the aim of giving fans worldwide an equal chance of owningone.

PRESS RELEASE: Fender is proud to announcethe release of a limited number of the popular American VintageSeries instruments featuring "1st46"neck plates, adesignation given to the first 46 instruments of each model year.These neck plates commemorate the fact that Fender was founded in1946, as well as the fact that Fender is releasing the mostaccurate and beautiful Fender reissue instruments ever from keyhistorical years. The neck plate will serve as an indicator thatthese "1st 46" models were the first of their kindto be built, as well as add an element of collectability to thesefirst run instruments. These units will be randomly distributedaround the globe for Fender fans everywhere to have a chance tofind one in their local stores.

The American Vintage Series has long presented some of Fender'sbest-selling guitars (their early-'80s introduction, in fact, wasone of the first signs that Fender was "back" as the CBS eraended). Today, Fender has boldly cleared the slate to make way fora fresh American Vintage series with new features, new specs andthe most meticulous level of vintage accuracy yet. Rather than justreplacing the previous models with different ones, the entirevintage-reissue concept has been completely and comprehensivelyre-imagined-restoring original tooling dies, voicing new pickups,reformulating vintage colors and more-based on actual vintageguitars designers tracked down to ensure even greater accuracy.