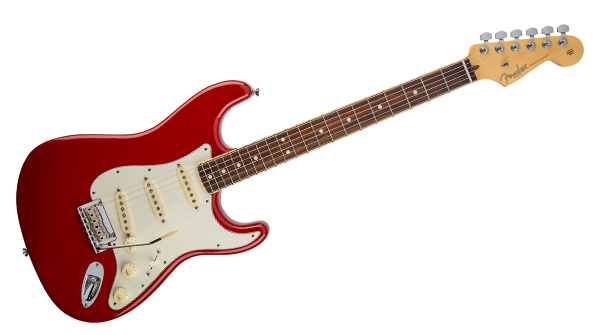 As Fender celebrate its 60th anniversary, the American guitar powerhouse is set to introduce a number of limited run of American Standard and American Special Strat® guitars, as well as a special edition Jazzmaster® guitar to their ever growing range.

(PRESS RELEASE): In celebration of the 60th anniversary of the Fender Stratocaster®, the world’s greatest electric guitar, Fender is proud to announce the release of several limited edition American Standard and American Special Strat® guitars, as well as a special edition Jazzmaster® guitar.

The venerable American Standard Stratocaster now comes in a new limited edition model featuring Fender’s innovative channel-bound compound-radius fingerboard and the time-honored look of a Dakota Red or Sonic Blue gloss finish. The fingerboard is inlaid into the neck in a design with an elegant appearance and a distinctive fretting-hand feel in which both edges are comfortably rounded, with no side seam between neck and fingerboard. Further, the fingerboard’s 9.5”-14” compound radius graduates smoothly from a more rounded profile at the nut (great for chording) to a more flattened profile near the body (great for soloing).

In addition, Fender introduces two brilliant new limited edition looks for the American Standard Stratocaster—Vintage White with a tortoiseshell pickguard and rosewood fingerboard, and Aztec Gold with a parchment pickguard and maple fingerboard. All the acclaimed features, sound and style of the archetypal American Standard Stratocaster, now in even more beautiful finish options.

The U.S.-made American Special Stratocaster HSS now comes in a supercharged limited edition model with a Seymour Duncan® Pearly Gates humbucking bridge pickup for even more pure, powerful tone. All the other great American Special features are still here, and a new Olympic White finish option lightens the look of one of the most formidable models in today’s Stratocaster lineup.

The Blacktop Jazzmaster is now available in a scorching special edition HH model with dual humbucking pickups for even more supercharged tone. Further, a new all-black look features a Candy Apple Red racing stripe that takes a sleek cue from the great “competition stripe” Fender models of the late ’60s and early ’70s.

For more information, go to www.fender.com.