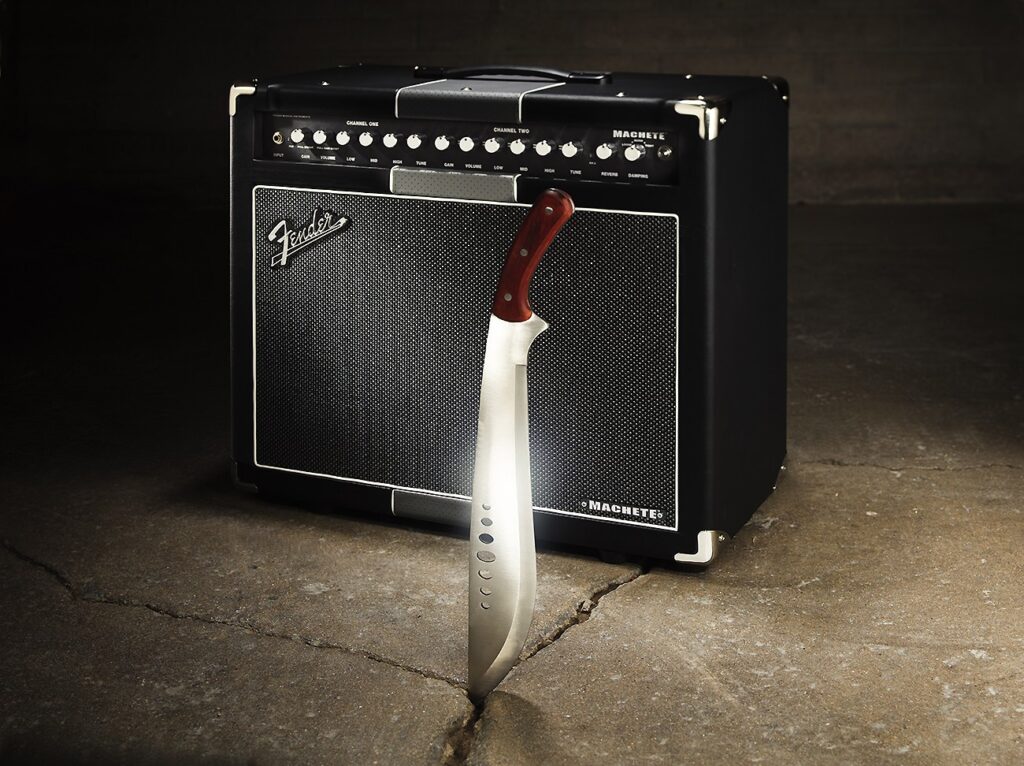 Fender has released a new Supersonic 22 Head and a new "Machete'range of amplifiers that promise to give guitarists a wide varietyof mix-and-match options and superior vesatility.

Decked out in distinctive black vinyl covering with inlaid whitepiping and gray vinyl "steering wheel grip" accents, the seriouslysinister Machete 50 Head is a high-gain 50-watt tube head designedfor the sonically adventurous. It features two channels (both gain,volume, low, mid, high, and notch); pull gain knob to adjustchannel one's preamp gain level; pull volume knob out to select the"channel one boost" channel for an extra boost of preamp gain;notch control that lets you adjust the channel one mid-frequencyattenuation for a variety of American and British tonal flavors;built-in reverb that adjusts the reverb level for both channels;adjustable damping control for loose or tight speaker response;power amp mute switch for silent recording; XLR line output withcabinet emulation selector switch; and MIDI in for use with MIDIcontrollers.

The Machete 112 and 412 Enclosures are professional-gradeclosed-back cabs with a single 12" Celestion Vintage 30 speaker andresonantly rock-solid birch-ply construction with distinctive blackvinyl covering, inlaid white piping, Black Silver Strand grillecloth, chrome corners and convenient pop-out casters. They addfullness when used as an extension cabinet with the Machete combo,and are a perfect match for the Machete 50 Head or other qualitytube amps.

Super-Sonic amplifiers are powerful tools that let guitaristscreate glorious Fender clean and overdriven tones and expressivemodern high-gain distortion all in one no-nonsense amp. TheSuper-Sonic 22 Head offers the exact same features as theever-popular combo version, which is based on the classic DeluxeReverb power amp design. This toneful medium-powered head mates toperfection with the Super-Sonic 212 cab or other quality 8-ohmspeaker cabinets. It is available in classic Black/Silver orvintage-style 1961 Blonde/Oxblood versions, and both feature ivoryradio knobs and flowing 1960s script logo.