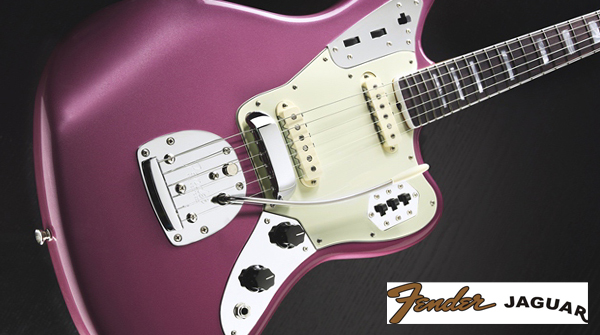 The FenderJaguar electric guitar is 50 years old now. Unveiledin 1962, it was the last of the guitar maker's four most famouselectric guitars to be introduced, and, as it turned out, the lastmajor six-string creation of the enigmatic genius whose nameadorned it. And while it might not be as omnipresent as itsbig-brother electric guitars of the 1950s, the Telecaster and theStratocaster, and its closest ancestor, 1958's Jazzmaster guitar,make no mistake: The Jaguar is a survivor with a great history, andyou have heard it.

From the Beach Boys and JimiHendrix in the '60s all the way toNirvana, the Red Hot ChiliPeppers and the Smashing Pumpkins in themodern era, the sleekly chromed-out Jaguar has blazed its ownunexpectedly successful trail through the history of rock music.Like some kind of "little guitar that could," it has surprisednearly everyone by continually finding its own distinctive placewith each successive generation of guitarists, from harmlesslysparkling old-school pop to subversive alt-indie cool andbeyond.

"One of the reasons I really like Jaguars is they're alittle restrictive for me to play, and that's a good thing,"said Johnny Marr, noted guitarist for the Smiths, ModestMouse and the Pretenders to name only a few. "I have to workwithin the limitations of the guitar. So it gives me a reallystrong direction. I can't get too 'blues rock' on it, as it's toofeminine to play power chords on it."

Alone among Fender's four main electric guitars, the Jaguar wasa child of the 1960s rather than the 1950s. When it was introducedin 1962, the Jaguar was intended by its creator, Leo Fender, as hiscompany's top-of-the-line model. But things haven't always beeneasy for Leo Fender's cool cat. Extinction has threatened theJaguar on several occasions over the past half century. In the end,though, there's just no keeping a great guitar down.

Here in its 50th anniversary year, the Fender Jaguar is back instyle and looking way hotter than any 50-year-old has a right to.The Jag's rock 'n' roll cred is equaled only by its irresistibleretro-chic allure. This distinctive instrument's anniversary comesat a time when popular culture has fallen in love with the Mad Menera-the early-'60s glory days of crisply tailored suits, extra-drymartinis and sleek European sports cars.

Very much a product of that same zeitgeist, the Fender Jaguar infact takes its name from the undisputed apotheosis of Euroautomotive design. The Jaguar E-Type was introduced in 1961 and wasimmediately praised as "the most beautiful car ever made" by noneother than Enzo Ferrari. Fender's Jaguar made its debut the verynext year. It is one of the last instruments that Leo designed forFender before selling the company to CBS in the mid '60s.

Introduced at a retail price of $375.50-about 25 bucks more thanthe Jazzmaster, which was Fender's next-most-expensive guitar-theJaguar was featured in an ad that hailed it as "the ultimate indesign and precision." A stylish black-and-white photo pairedFender's new top-of-the-line beauty with its automotive namesake.The ad was the handiwork of real life "Mad Man" Robert Perine, whocreated Fender's youthfully eye-catching late-'50s/early-'60s adcampaigns.

Fender's big plans for the Jaguar may have paid off right fromthe start had it not been for a momentous event that changed thecourse of musical history. The 1963-'64 ascendancy of the Beatlesand the advent of the British Invasion touched off a mad clamor forguitars made by Gretsch® and Rickenbacker®, the two main brandsplayed by the Beatles and their Brit brethren.

For the most part, though, the Jaguar remained something of acult guitar in the '60s and '70s, as the Gretsches andRickenbackers of the British Invasion gave way to the Stratocaster,Telecaster and Les Paul guitars of psychedelia, blues rock, glamand metal. Consequently, Fender dropped the Jaguar from its line in1975.

But it was soon to be revived in a dramatic way. The punk rockrevolution of 1976-'77 brought a radical new aesthetic
to electric guitar playing. Nascent punk guitarists looked forinstruments that were cheap and free of the taint of old-schoolrock. Pawnshop Jaguar and Jazzmaster guitars fit the billperfectly. Leo's two uptown girls became the new queens of thedowntown scene.

Favoured by guitarists in punk and post-punk acts includingSonic Youth, My Bloody Valentineand assorted others, the Jaguar rode a new wave of popularity. Andthat wave crested when the Jaguar was adopted by the most famousfigure in recent rock, Nirvana's KurtCobain, whose emotionally charged shifts from crystallineintrospection to full-distortion mayhem propelled the trio to theforefront and put grunge on the map. What Jimi Hendrix was to theStratocaster, Kurt Cobain was to the Jaguar. He inspired legions ofplayers to pick up aJag.

The Jaguar returned to Fender's product line by the mid 1980sand has been going strong ever since. Cobain and Marr have beenhonored with their own signature model Jaguar guitars, andguitarists can now choose from a full line of beautifully appointedJaguar guitars with a wide range of features and prices. Meanwhile,the market for vintage Jaguar guitars continues to thrive.

"I think they're absolutely beautiful," said Marr. "I loveall the chrome. I love the shape of it; this kind of early-'60sidea of 'space age' paired with a classic sort of 'Fender'thing."

So raise a martini glass to the Jaguar and its 50-year sojournin our midst-a guitar with style, an impeccable pedigree and afascinating history.