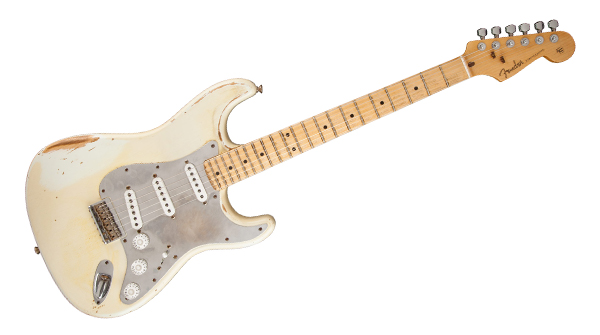 Many might not recognize the name, but make no mistake—the sounds of Nile Rodgers and the Hitmaker are virtually inescapable. As a guitarist, producer, composer and arranger, his sales have topped more than 100 million albums over a career now in its sixth decade, and hardly a day goes by when you don’t hear music to which he has contributed in some invaluable way, very often with the Hitmaker in hand. He wrote the book on disco/R&B guitar in the late 1970s with Chic and Sister Sledge, propelling both acts to the top of the charts with unerringly radio-friendly musicianship, songwriting and production chops.

Rodgers’ affectionately nicknamed Hitmaker is a 1960 Stratocaster with a 1959 neck. He got it for a trade-in long ago at a small shop in Miami Beach, Fla. Exceptionally light in weight; it has a maple fingerboard and bears a well-worn white finish. Rodgers says it doesn’t sound like any other Stratocaster in the world. The Fender Custom Shop Nile Rodgers Hitmaker Stratocaster features a light alder body and one-piece straight-grain maple neck, with a 9.5”-radius maple fingerboard, 21 6105 frets, three Custom Shop 1969 single-coil Stratocaster pickups, five-way switching, chrome-plated brass pickguard, three white “speed” knobs, vintage-style hard-tail bridge, locking Sperzel® tuners and a worn Relic® lacquer finish in Olympic White.