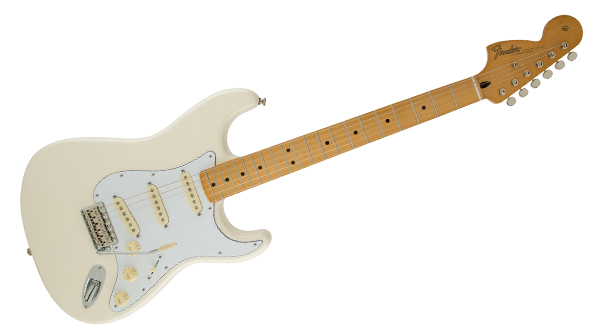 (PRESS RELEASE): Just in time for the holidays, Fender announces the Jimi Hendrix Stratocaster guitar, one of the most highly anticipated musical instruments in recent years.

The scarcity of left-handed Stratocaster guitars in the late 1960s required Jimi to flip over right-handed guitars and restring them to suit his southpaw approach. The resulting "reverse" headstock and angled bridge pickup gave Jimi's Stratocaster a unique tonal response and a distinctive look. These custom features have been incorporated into the new Jimi Hendrix Stratocaster for the right-handed masses. The headstock produces a longer string length for the bass strings, creating a tighter playing feel along with easier bending and vibrato on the treble strings. A trio of unsurpassed American Vintage '65 single-coil pickups includes a reverse-slant bridge pickup, producing uniquely inspiring tone with a tight, warm sound and enhanced upper harmonics and definition. The highly versatile 9.5"-radius "C"-shaped maple neck with medium jumbo frets offers a flatter playing surface - ideal for chording while simultaneously allowing you to bend notes to the stratosphere.

Commemorating Jimi Hendrix's unrivaled legacy, the large '70s-style headstock bears the guitarist's signature on the back. A unique neck plate displays a shoulders-up silhouette of the man himself, leaving no doubt as to the inspiration behind this guitar. Available in classic Black or Olympic White, both with chrome hardware and including a gig bag, the Jimi Hendrix Stratocaster allows guitarists to experiment from Jimi's altered axis point-of-view and unleash their own music.