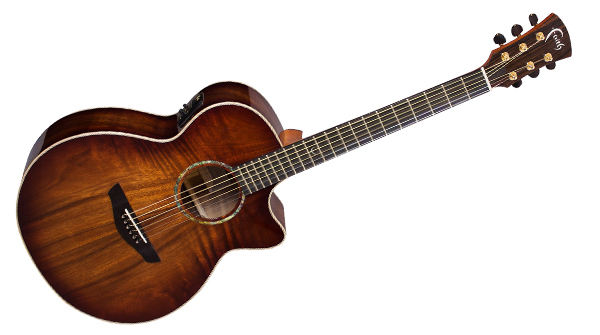 (PRESS RELEASE): Faith Guitars are pleased to announce their Venus Blood Moon model is now available in UK stores following the initial sell out success of the first arrivals in December 2015. Unprecedented demand for the striking addition to Faith’s popular Venus series saw the Blood Moon sell out very quickly upon its initial release to UK retailers.

This OM style electro cutaway continues in the vein of other models from the Faith Guitars line-up by using innovative tonewoods for both sonic variety and aesthetic impact.Tonally, it is similar in timbre to a solid mahogany instrument, but benefits from a slightly more pronounced treble response.

Given the characteristics and quality of the Javanese High-Figure Trembesitonewood used on the top, back and sides of the Venus Blood Moon, the guitar can only be produced when suitably high figure timber is harvested.

“We have been blown away by the beauty of these Blood Moon instruments”, comments Alex Mew, Faith Guitars’ brand manager.

“Although we have used attractive Trembesi on the back of previous instruments, we discovered that there were locations from which we could find the most incredibly figured timbers. This class of figure is highly-prized by woodworkers, and so we set about testing it as a sole tonewood for guitars. Delighted with the sound, Patrick Eggle and I worked on finding the right colour palette to further enhance the natural appearance, and after a few trials, the Blood Moon Burst was finalised.”

Opening sales of the Blood Moon were highly impressive with customers particularly taken by the“incredible playability” and the beautiful grain of the Trembesiwood and its “ability to capture and shimmer in light.”

For more information on Faith Venus' Blood Moon Back.