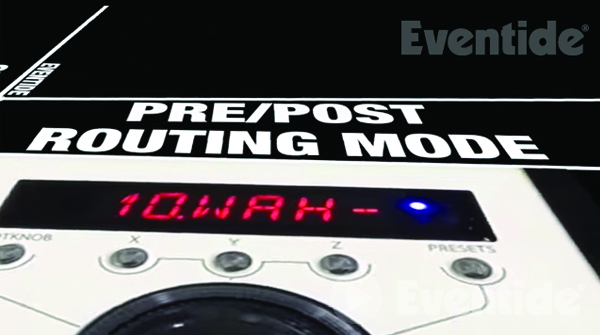 (PRESS RELEASE): Eventide release software updates for all of its stompboxes. Eventide stompboxes are being used by thousands of artists worldwide and many of these artists have requested additional features to help them use our products in new ways. The new features announced are available immediately for H9 with a public beta to begin in August for ModFactor, TimeFactor, PitchFactor and Space.

This update also adds another routing option -- the ability to use one channel for effects (Wet) and the other as an unaltered passthrough (Dry). This gives studio and live musicians options for things like re-amping, testing house mix levels and so on.

All routing is completely software based and saved with each preset. There’s no need to reach down to throw a switch to change routing when a preset is selected, it’s set in advance along with your presets.

Our customers also asked us for the ability to use an expression pedal (or MIDI controller) to control the signal level. The new Swell feature provides that option. You now have the option, by preset, of placing Swell on either the input or output signal.

Finally, the update delivers two other requested enhancements: MIDI Merge and a Press & Hold option for auxiliary (aux) switches. The MIDI Merge feature will mix incoming MIDI signals and MIDI signals that it generates and send the result to the outputs. This will be of particular interest to people driving multiple stompboxes from a MIDI pedalboard. The new Aux Switch configuration adds the ability to press and hold a switch (Momentary) in addition to the existing on and off states (Latch). For instance, you can have a parameter change only while the switch is being held. This allows modulating wet/dry mix or any other parameter knob just by holding or tapping on the Aux Switch.

“The features we’ve added are not superficial, run-of-the-mill additions or bug fixes typical of software updates. We’ve had to dig deep into the code. The scale of these changes demanded a significant investment in development and testing, but the results should open up new creative options for musicians,” commented Nick Rose, Senior Product Developer. “Eventide has a long tradition of supporting its products many years after release. Decades, even. We understand people have paid hard-earned money and we want them to get the most out of that investment.”

These updates are free and are available immediately for the H9 by downloading the latest version of the H9 Control application (Mac, PC or iOS). Open beta testing will begin in August for the TimeFactor, ModFactor, PitchFactor and Space pedals with a release to follow.