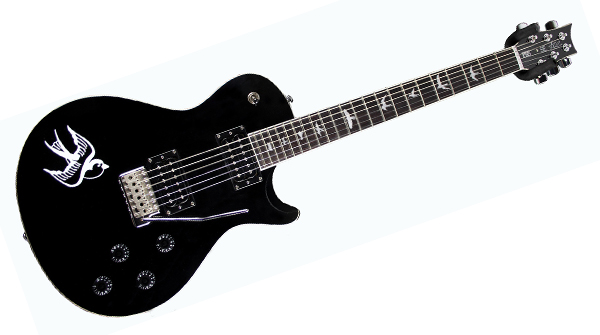 (PRESS RELEASE): PRS Guitars Europe has announced the launch of a new, limited edition SE Signature model, available exclusively this side of the Atlantic.

Created in conjunction with Ace from multi-platinum Brit-rockers Skunk Anansie, the SE Ace Signature is based on the customised US Singlecut guitars which he’s played for 15 years.

A full-depth solid mahogany body and bevelled maple cap – teamed with Ace’s choice of SE 245 pickups – give the guitar a classic blend of modern and vintage tone. Other key features include Ace’s favourite Wide Thin neck carve, 25” scale length, 22-fret mahogany neck with rosewood fretboard, old school birds inlays and smooth, stable PRS tremolo system. The guitar even comes with a swallow-in-flight sticker (as seen on Ace’s own Singlecut) in the included gigbag.

“I worked closely with PRS to get the specs as close as my possible to my original, says Ace, “so players could experience a true signature model and what I feel when I play. I am totally blown away by my new SE Ace signature. Not only does it look like my favourite PRS, it plays just like it too. When I first plugged it in, I couldn’t believe the quality tone and the playability - the sound coming out of the amp was awesome. I recorded some Skunk Anansie tracks and it sat in the track just as well as my US PRS Singlecut.”

“Since I started the Ace Guitar Academy I’ve wanted a guitar that is affordable for younger players, but one that is a proper instrument that can be toured and used in the studio –I will definitely be using it for both”.