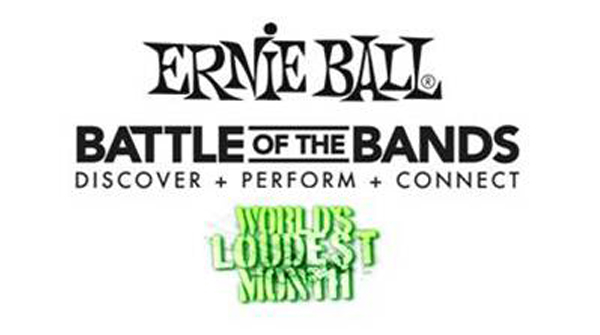 Iconic premium guitar string manufacturer Ernie Ball partners with World's Loudest Month to launch Ernie Ball Battle of the Bands at the Monster Energy's Welcome To Rockville and Rock on the Range festivals. The winning band for each competition will receive an all-expenses paid trip to the respective festival for their onstage performance, over $15,000 in prize gear from Music Man, Drum Workshop, Zildjian, Blackstar, Apogee Electronics, Electro-Voice, TC Electronic, JH Audio and an Ernie Ball endorsement.

Through Ernie Ball’s submission portal and platform battleofthebands.com, bands register at no cost and have the opportunity to enter multiple contests, upload their music, share their profile, garner exposure and compete to be the next "Battle of the Bands Winner."

In this latest partnership with World’s Loudest Month, entrants will have the chance to perform at one of two major festivals featuring the biggest names in rock music: Monster Energy's Welcome To Rockville or Rock On The Range. In 2013, the World’s Loudest Month festivals featured over 125 artists playing for more than a quarter of a million rock music fans across the country over five consecutive weekends.

This year's World’s Loudest Month festival series kicks off in Florida with Monster Energy's Welcome To Rockville on April 26 and 27, where the two-day destination music festival will feature a massive all-star rock lineup including co-headliners Avenged Sevenfold, The Cult, Rob Zombie, Korn, Five Finger Death Punch and Staind. A few weeks later, one of the biggest and most-acclaimed active rock festivals, Rock On The Range on May 16, 17 and 18 in Columbus, Ohio, will feature live performances by music greats including Guns N’ Roses, Avenged Sevenfold, Kid Rock and many more.

"The World's Loudest Month features some of the biggest and best festivals of the year, and we're beyond thrilled to partner with them. We're on the hunt for some killer undiscovered bands, and look forward to hearing some great music!" said Brian Ball, Vice President of Ernie Ball Inc.

For over 17 years, the Ernie Ball Battle of the Bands has grown to become one of the most successful live music promotions of its kind, with over 25,000 bands entering every year, offering a platform for emerging musicians to cultivate their craft, create networks and establish a community.