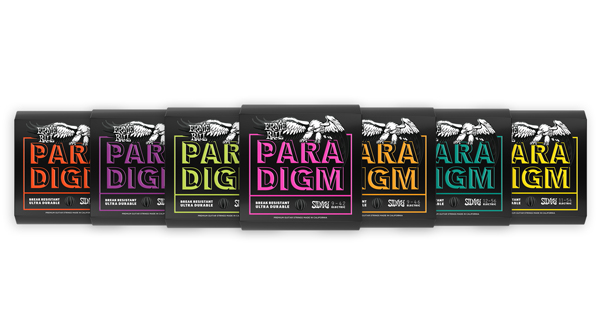 In 1962, Ernie Ball introduced Slinkys, the iconic light-gauge electric guitar strings widely revered by some of the most important artists in rock & roll history, including Eric Clapton, Keith Richards, Jimmy Page, Slash and Metallica to name but a few. Fifty-five years later, the forward-thinking, family-run company is once again revolutionising guitar strings with the release of Paradigm, the most advanced string technology ever created – and the first-ever to come with a fully-backed guarantee: if Paradigm strings break or rust within 90 days of purchase, Ernie Ball will replace them free of charge. Paradigm strings feature superior break-resistance and unparalleled durability while delivering the iconic Slinky tone.

Over the course of the past few months, Ernie Ball has been offering guitarists the opportunity—and challenge—to beta-test Paradigm. Among those who tried—and failed—to break the strings are Kenny Wayne Shepherd and Dream Theater’s John Petrucci.

Says Shepherd, “These are definitely the best-sounding and most durable strings I have ever played.” Adds Petrucci, “These new Paradigm strings somehow withstood the most severe and cruel punishment I could muster up without actually breaking the guitar itself! They are crazy strong!!”

“Creating the technology behind Paradigm required our engineers to dig deeper than ever before to investigate and improve every facet of what goes into making a string,” says Ernie Ball President Brian Ball. "Paradigm technology represents a new level of strength and longevity while continuing to deliver the tone that only Ernie Ball is known for. They also feature a combination of our proprietary Everlast nanotreatment coupled with a breakthrough plasma process that further enhances the corrosion resistance like never before. More than five decades after my grandfather pioneered the electric guitar string, we’re proud to continue with the same passion, commitment and dedication to innovation with Paradigm.”

Durability: Each Paradigm string is plasma-enhanced, providing improved corrosion resistance coupled with Ernie Ball's patented Everlast nanotreatment, which repels sweat and build-up to keep your strings clean and crisp with zero change to the legendary Slinky® tone and feel.

Tone: Paradigm strings maintain legendary Slinky tone and have all the advantages of a coated string without affecting sustain. Plus, there’s no flaking or difference in feel compared to traditional strings.