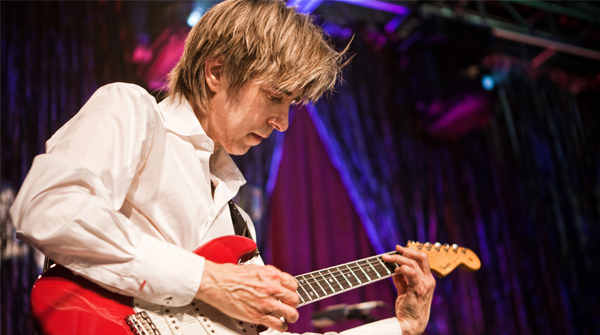 Thirty years after his breakthrough solo release Tones brought him national recognition, Texan guitar legend Eric Johnson is releasing his first all-acoustic album. Showcasing nine original compositions and four covers, EJ is easily Johnson’s most intimate album to date. “Ever since I was young, I’ve played piano and acoustic guitar in my private life,” Johnson says. “This type of music has always been a part of me, but I never showcased it on any kind of bigger level, like a full acoustic record. With EJ, I just decided to be more honest with myself and everybody, and show more of my personal side.” EJ brings listeners as close as possible to hearing Johnson in his own living room, performing songs on piano and steel-string and nylon-string acoustic guitars.

Johnson, long known for his painstaking approach to making records, used a much more immediate approach for the self-produced EJ. “Almost all of that material was cut live,” Johnson explains. “Some of the songs I actually sang and played at the same time – just live in the studio. Recording this way gave it more of an honest realism and organic emotion. Especially on the acoustic, you just have to get in there and play.”

On the original compositions “Wonder,” “Fatherly Downs,” and “All Things You Are,” Johnson frames his voice with his prized 1980 Martin D-45, a gift from his late father. He plays the steel-string on his superlative instrumentals “Once Upon a Time in Texas,” “All Things You Are,” and “Song for Irene.” He conjures the beautiful, pensive tones of “Serinidad,” another original instrumental, on a Ramirez nylon-string guitar. A spirited steel-string arrangement of Simon and Garfunkel’s “Mrs. Robinson” rounds out the solo guitar tracks.

Johnson recasts another Simon and Garfunkel favorite, “Scarborough Fair,” for voice and piano, and plays piano on the originals “Water Under the Bridge,” “November,” and “Wrapped in a Cloud,” an ensemble track with acoustic bass, cello, drums, and percussion. In a move that’s sure to surprise his fans, Johnson rearranged Jimi Hendrix’ “One Rainy Wish” for guitar and piano, capping the performance with a jazz-inflected piano solo. Rounding out the record is Johnson and guest guitarist Doyle Dykes’ superlative cover of Les Paul and Mary Ford’s 1951 classic, “The World Is Waiting for the Sunshine.”

Throughout his career, Johnson has approached music as a healing force, a way to enhance a listener’s consciousness and conjure joy and inspiration. “That’s what I’ve always appreciated most about other artists,” he says. “Some artists inspire us to wake up and get back to the clarity of consciousness. With this record, I’m trying to do that too, because I appreciate it so much in other people.”

In support of EJ’s October 2016 release, Johnson will embark on a series of U.S. tours that will bring him to about 60 cities nationwide. Stay tuned for dates and details.