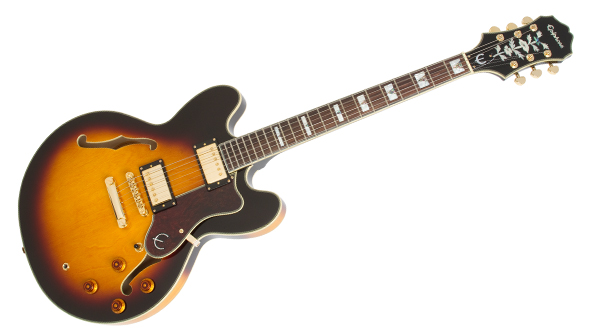 Epiphone continues its 140th anniversary celebration by putting a spotlight on two of its critically acclaimed trademark archtops – the Sheraton II and The Dot, now featuring Alnico Classic pickups.

The Epiphone Sheraton II and The Dot have played an important part in Epiphone’s history. The Sheraton, originally released in 1958, was Epiphone’s first new electric guitar made in the historic Kalamazoo, Michigan factory it shared with Gibson. The Epiphone Dot, modeled after the first generation of late 50s “335” thinline archtops, signaled Epiphone’s re-emergence in the early 90s as the premier maker of professional affordable instruments.  The arrival of the modern Sheraton II and The Dot made it possible for anyone to afford a true “335” style archtop electric that was dependable, professionally made, and had all the classic tone of the hard-to-find originals.

“Epiphone is renowned for our archtops and both the Sheraton II and The Dot are a vital part of our history,” said President Jim Rosenberg.

“No collection is complete without an Epiphone archtop, and The Sheraton II and The Dot are really perfect guitars for beginners and pros.”

The Sheraton II has long been an artist favorite. John Lee Hooker described it as an “outdone 335” and today it can be heard on stage with Alabama Shakes, Vampire Weekend and the Kings of Leon, among many others.

The Sheraton II features a laminated maple body with a mahogany center block, just like vintage originals, and the hard maple SlimTaper C profile neck is hand glued. The Sheraton II is also a visually stunning guitar with gold pickup covers, gold hardware and gold Grover Roto-matic 18:1 ratio machine heads.  The fretboard has Pearloid and Abalone Block and Triangle inlays and the historic Epiphone “Tree of Life” headstock inlay. The headstock, body and neck all have beautiful multiple binding and the bound “tortoise” style pickguard has the classic metal “E” for Epiphone.

For those seeking the classic “335” sound with less flash, the dependable Dot has all the same tone, feel and dependability.  The Dot is constructed of premium laminated maple with a mahogany center block and a hand-fitted, glued-in 24.75” scale mahogany neck. The Dot also has a classic rosewood fingerboard with traditional "Dot" inlays, a 1.68" nut, a SlimTaper™ “D” profile and the traditional Sloped Dovewing Epiphone headstock.

Both the Sheraton II and The Dot feature Epiphone’s premier Alnico Classic pickups with world-famous Alnico magnets, the secret behind all great humbuckers. And both guitars include first-class Epiphone quality electronic parts like full-size 1” 500K Ohm potentiometers, Epiphone's all-metal pickup selector switch and a heavy-duty output jack. And of course, both guitars come with Epiphone’s Limited Lifetime Warranty.

Visit Epipohone.com to read learn more about the history of the Shearton II and The Dot and all about Epiphone’s 140th Anniversary Celebration.