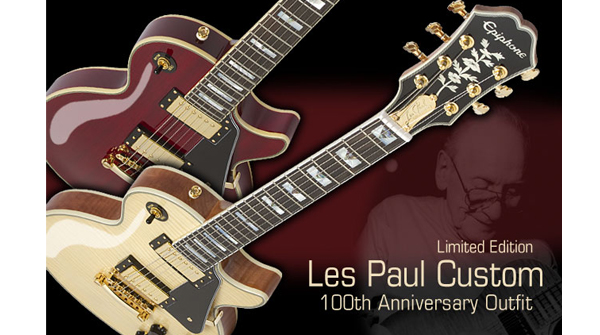 The Roots of the Les Paul begin at Epiphone

Throughout 2015, Epiphone proudly celebrates the 100th birthday of Les Paul, the Wizard of Waukesha, the Thomas Edison of rock n' roll, and a lifelong fan and friend of the Epiphone and Gibson families. Les was a regular visitor to Epi Stathopoulo's factory in Manhattan where Les made the first prototypes of the Les Paul guitar, The Log.

"I knew Epi Stathopoulo and the Epiphone people very well and loved their instruments," Les recalled in Les Paul, In His Own Words, "Working on Sundays, I took a length of 4x4 Pine, put an Epiphone neck on it, wound a couple of homemade pickups, and mounted them on the wood. Then I added a bridge and Vibrola tailpiece, strung it up, and I had The Log. I was looking for volume, tone, and sustain that could be controlled, still chasing the idea that started with stretching a guitar string over a section of railroad rail."

Les continued to be an Epiphone fan for the rest of his life and the beautiful new Ltd. Ed. Les Paul Custom 100th Anniversary Outfit is a suitable and dazzling tribute to the most popular rock & roll guitar in the world and its equally revered inventor.

The new Epiphone Ltd. Ed. Les Paul Custom 100th Anniversary Outfit features a classic Mahogany body with the time-honored Les Paul profile in both a Cherry finish with a Mahogany veneer and a Natural finish with a AAA Flame Maple Veneer. Both finish options have 5-layer Cream and Black binding on the top and back. The Mahogany neck has a 1960s SlimTaperTM D-profile and is glued to the body with a Mortise and Tenon neck joint. The smooth Rosewood fingerboard is bound and has a 12" radius with 22 medium jumbo frets, a 24.75" scale, and a 1-11/16 nut. The Mahogany neck features traditional Epiphone Block & Triangle inlays in Abalone and Pearloid.

The Les Paul Custom 100th Anniversary Outfit has many other beautiful features that set it apart from any other Les Paul ever made including a 24K Gold plated metal truss rod cover engraved with "Les Paul 100th Anniversary." Plus, the traditional "Sloped Dovewing" headstock has 5 layer Cream and Black binding and features the original Epiphone "vine" inlay in Pearloid, a classic 40s era Epiphone logo with a Zirconium Gemstone dotting the "I", and on the back of the headstock a "The Legacy of Les Paul: 1915 - 2015" commemorative decal.

ProBucker™ pickups recreate the sound of the original hand-wound "PAF" humbuckers designed by Seth Lover at the Kalamazoo factory in the late '50s by featuring all the same ingredients as the originals including Alnico II magnets, Elektrisola magnet wire, 18% nickel silver unit bases and covers, and pole screws, slugs and bobbins manufactured to Gibson's original specifications. The result is a phenomenal pickup that, over time, will develop the subtle, one-of-a-kind characteristics that previously you could only get from vintage humbuckers. And best of all, those unique pickup characteristics will give your guitar a unique "voice." No two vintage Les Pauls sound alike and ProBuckers™ will give your Epiphone Les Paul Custom 100th Anniversary a one-of-a-kind sound that will only get better the more you play. So plan on playing this Les Paul Custom a lot.

The Ltd. Ed. Les Paul Custom 100th Anniversary Outfit comes with a ProBucker™-2 humbucker in the neck position that is slightly overwound for greater definition at higher volumes. The bridge pickup is a ProBucker™-3 humbucker, which is also slightly overwound to give your solos a wide tonal range. Each pickup features coil-splitting via a push/pull control at each pickup's volume knob.

For over 50 years, Les Paul encouraged and cheered on Epiphone to keep Les Pauls on the cutting edge of electric guitars. "I tell you they are damn fine instruments!" Les said of Epiphone Les Pauls. "A kid can get an Epiphone and have something worth something, not a hunk-of-junk like the other brands. He can learn well on one and have it and play it the rest of his life. Just that they need a good guitar like an Epiphone so they won't get discouraged... so they will practice and work hard and enjoy their music."