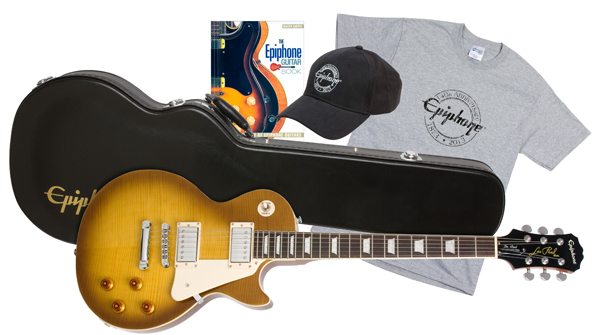 To celebrate Epiphone’s 140th anniversary and the release of Rocksmith 2014, Epiphone announces a year-long sweepstakes happening now, offering an assortment of monthly prizes to Epiphone fans. Top prizes include an Epiphone Les Paul Standard Plustop Pro, Epiphone t-shirts, hats and the critically acclaimed new collection The Epiphone Guitar Book, the first comprehensive history of Epiphone from 1873 to the present.

“Together, Epiphone and Rocksmith are changing the way people learn how to play guitar and bass,” said Epiphone President Jim Rosenberg.

“Rocksmith 2014 will prove to be an exciting new chapter in the ongoing evolution of this revolutionary learning software, and Epiphone will be there every step of the way.  The sweepstakes will be a great way for our longtime fans and new fans to get in on the fun.”

Rocksmith made a huge impression when it was first released by Ubisoft in 2011. It was (and still is!) the only video experience of its kind where a player can plug in a real guitar and both play and learn at the same time. The original Rocksmith became a holiday sensation and kicked off a “Plug and Play Revolution.” Now, just in time for the holidays, Rocksmith 2014 has arrived to give players an even more incredible experience.

Ubisoft first chose Epiphone as the model guitar for the ultimate Rocksmith experience after trying out many other brands. They were impressed with Epiphone's 140 years of rich musical heritage, quality and performance.

“When fans come to Epiphone.com, they can enter our sweepstakes and also browse our guitar guide so they can easily choose the right Epiphone to go with their new Rocksmith 2014,” added Jim Rosenberg.

One of the most exciting prizes in the year-long sweepstakes, which will begin October 1, 2013 and continue through September 30, 2014, is the monthly prize of a Les Paul Standard Plustop PRO, the most renowned and beautiful version of the world’s #1 electric guitar.  Featuring a AAA flame maple top and Epiphone’s acclaimed ProBucker™ pickups with coil-tapping, the Epiphone Les Paul Standard PlusTop PRO is every player’s dream Les Paul.

Walter Carter’s The Epiphone Guitar Book, A Complete History of Epiphone Guitars, published to coincide with Epiphone’s 140th anniversary, is a richly illustrated 147-page history that follows Epiphone through the jazz era in New York, the move to Kalamazoo, Michigan and the modern era, including the move to Epiphone's new headquarters in Nashville. And, of course, Les Paul, The Beatles, The Rolling Stones, The Band, Marcus Henderson, Frank Iero and many other great artists are included in the story as well.