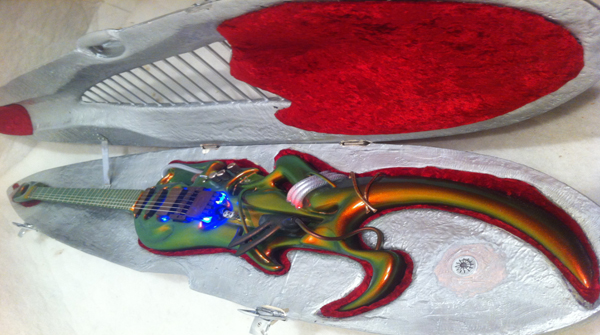 Emerald Guitars, based in beautiful Donegal,Ireland, is proud to announce that Grammy Award-winning mastermusician Steve Vai is playing Emerald's "Ultra" guitar onstageduring his 2012-2013 world tour. Featured onstage in theSteve Vai song "The Ultra Zone," thisone-of-a-kind custom guitar is sure to generate a lot of discussionwith its unearthly design, built-in lasers, and its chameleon-liketendency to change color (and even seem alive) under the rightlight.

Steve Vai is a virtuoso guitarist and visionarycomposer who has sold over 10 million albums, and whose 16th solorecord was released this month. Starting in 1980 as FrankZappa's "stunt guitarist," Steve Vaiproceeded to work with major artists including David LeeRoth, Whitesnake, JoeJackson, Alice Cooper, and Meat Loaf among many others.Vai is frequently featured on the cover of major guitarpublications and is constantly cited in countless lists as one ofthe greatest and most influential guitarists of all time. OfficialSteve Vai website: www.vai.com

Steve Vai, on the Ultra guitar:

"At first I wasn't sure if I should plug it in and play it orcrawl inside of it and fly it to Venus, so I did both... at thesame time. After handling it, it was obvious that it was not just amasterpiece extravaganza of a carving frenzy, but it was also avery well crafted and playable instrument. In the years followingmy receiving the Ultra guitar, Alistair has continued to createunique guitars that are constructed from original designs andmaterials that produce stunning visual and audible heights, butmine is the only one that can fly to Venus and back without missinga beat."

For Alistair Hay of Emerald Guitars, seeingSteve Vai embrace the Ultra guitar and use itonstage each night is tremendously gratifying, and marks a returnto the original point of inspiration for building theinstrument.

"Steve Vai is truly one of the most creative, accomplished,influential guitarists of his generation and to see him performonstage in front of thousands of fans playing the guitar I made forhim... it's a real milestone for Emerald Guitars and for me,personally, it's a dream come true."

The Ultra guitar was created specifically for SteveVai as a tribute andoriginated from a concept drawing byillustrator Aaron Brown for the cover of Steve Vai'sThe UltraZonealbum.

A full line-up of Emerald Guitars can be viewedat www.emeraldguitars.com.