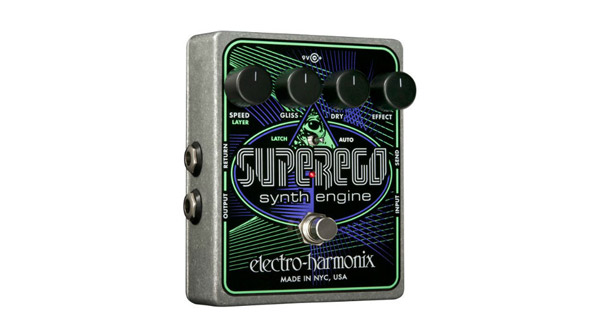 The Electro Harmonix Superego Synth Engine Pedal is a guitareffect of the type that could only come from EHX. It takes thetechnology from it's own 'Freeze' pedal, but adds new, creative andinspirational features. The 'freeze' holds the guitar notes playedgiving them 'infinite sustain', lending the tone an ambient,otherworldly feel. Notes can also be layered, such that a note canbe frozen, and other notes played and sustained over the top.

Unlike the original Freeze pedal, the Superego has a new Glisscontrol. This acts as like a portamento effect, such that oneplayed note 'slides' in pitch, into the next note. The Glisscontrol adjusts the time it takes for one note to reach theother.

Another unique feature of the Superego is the effects loop. Thisallows the frozen output to be routed through additional effects,and mixed with the original signal. The pedal can be operated inLatch mode, where notes are frozen by momentarily pressing thepedal switch down, and auto mode, which sustains notesautomatically.

Watch the video below