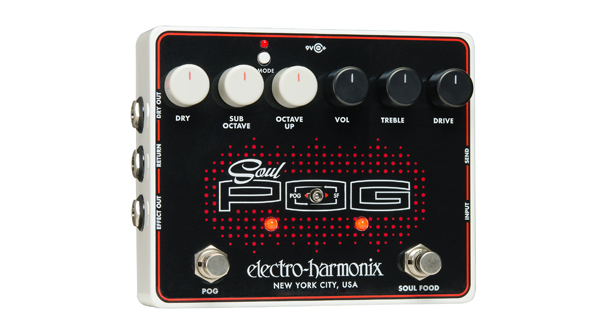 (PRESS RELEASE): Electro-Harmonix has combined the Soul Food Transparent Overdrive and Nano POG Polyphonic Octave Generator in one powerful multi-effect. The Soul Food’s clean boost, enhanced touch response and added headroom make it a pedal many players never turn off. With its Drive and Volume controls turned up, the Soul Food will readily drive a tube amp into saturation while still retaining clarity and definition. The Nano POG builds on the legacy of EHX’s POG series of effects pedals to provide a polyphonic sub-octave and octave up with fault-free tracking and sound. The Soul Food and Nano POG retain all the controls each possesses as a standalone pedal and can be used independently or linked together with either appearing first in the chain.

A built-in effects loop has been added and enables the user to insert other pedals between the two. In addition, a new Mode Switch in the Nano POG lets the player select the algorithm used for the octave up sound. In one position, it is optimized for fast, single note playing while in the other the harmonic content of chords is enhanced. The Soul POG comes equipped with a standard EHX9.6DC 200mA power supply, has a U.S.A.