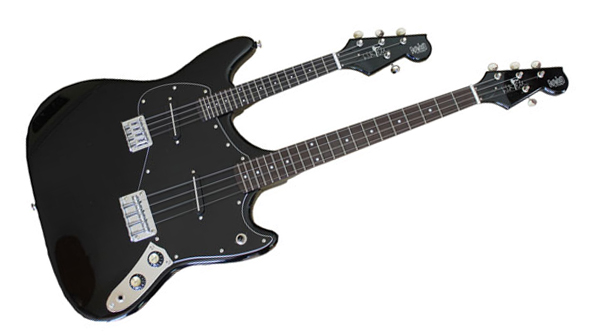 Warren was looking for a new custom instrument in time for his 2014 tour schedule with Nick Cave and the Bad Seeds. “In 2013 I was on tour forever and I threw the idea out there to Mike after a rather surreal dream I had involving Daft Punk and an orangutan” said Warren, “and rather than treat me like I had been on tour for too long, he put the machine in motion and ran with it. When the prototype of Black Ned arrived it knocked me out”.

Eastwood has fused the popular Warren Ellis Tenor with a 4-string Mandocaster to create a completely new instrument. The MandoTenor not only meets Warren’s needs, but also offers a unique twist for any professional studio. This sleek dual cut carved alder body comfortably allows you to switch from the 14” scale mandolin to the distinctive sound of a 23” scale tenor - or both at the same time. It features a 3-way switch, master volume and tone controls and two single coil blade pickups. The new Eastwood MandoTenor will soon be turning heads and ears around the world. This initial Limited Edition Release of only 36 instruments ships in a tour ready custom fit hard shell case complete with a Certificate of Authenticity signed by Warren Ellis.