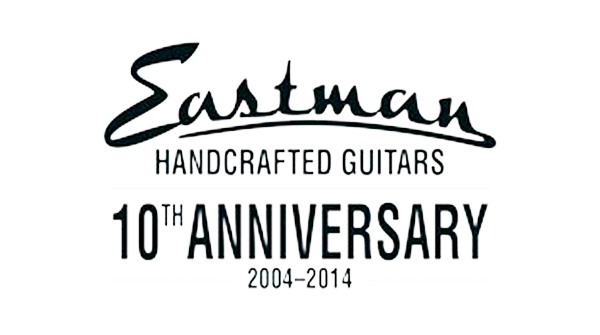 Eastman Guitars will celebrate their 10th anniversary in 2014, kicking off this January at the 2014 NAMM Show in Anaheim, CA. Headquartered in Pomona, CA the renowned violin and cello maker, and once fledgling guitar upstart, officially debuted their inaugural production line of acclaimed archtop guitars in 2004, before a rapid expansion over the past decade that has the company now manufacturing instruments that include their “Thinline” hollow-body electrics, golden era inspired flattop acoustics, and handcrafted traditional mandolins.

“I am truly humbled by the success of Eastman Guitars in reaching this momentous landmark,” said company founder, Qian Ni.

“The growth and impact that we have made in 10 years serves as a testament to the dedication and commitment our designers, craftsmen, and employees have had in following the creative vision and inspiration we had when we conceived our next steps. I have long admired the guitar for its aesthetic beauty, the complex simplicity of its mechanics, and its immensely influential role in the canon of musical history. We’re excited for what the future holds as we continue one of the most fascinating musical traditions the world has known.”

Qian Ni, a classically trained flute player, studied at the prestigious School of Music at Boston University, before founding Eastman Strings in 1992 as a small U.S. distributor for international violin-makers. From his humble beginnings importing and selling instruments store by store across the country, literally from the trunk of his car, Ni’s perseverance over time afforded him enough success to make the leap from a distributor to manufacturer. Two years later, a profound concept and bold decision led to Ni to hiring several master builders, opening a master violin workshop – one of the first the world had known since the first half of the 20th century  - and set about to begin handcrafting his very own instruments.

In the short time since founding his initial workshop, the reputation of Eastman Strings’ instruments became a worldwide standard. By the turn of the millennium, Eastman’s simple philosophy of “not sacrificing excellent craftsmanship for affordability” had established the company as the leading supplier of violins, violas, basses, and cellos in the United States.

Noting the similarities to the violins and cellos Eastman Strings were already producing, the company began to take an interest in guitars. Ni admired such renowned guitar builders as John Monteleone, Bob Bennedetto, John D’Angelico, James D’Aquisto and Claudio Pagelli for their creativity as much as their dedication to traditional, old world building techniques. Confident that the experience the company had accrued building hand-carved violins and cellos, guitar making became a natural transition.

The company had an advantage by utilizing resources from pre-established relationships with wood suppliers to purchase woods such as Adirondack spruce, flamed maple and ebony from the same sources as larger, more well-known acoustic guitar companies, allowing Eastman to build with the same premium tonewoods, but at more desirable price points.

With Qian’s input and vision, his luthiers developed the initial prototypes, as yet without logos, and were offered up for feedback from the retailers. After such a warm welcome, production began in 2003 and by the Winter NAMM 2004 tradeshow Eastman was ready to take dealer orders. From those initial two prototypes the archtop line has expanded to include nearly two-dozen different models in a variety of sizes, shapes, and designs – from traditional to modern.

As the company continued to expand in the marketplace, critics began to take notice raving “a new day has dawned on the world of carved-top jazz guitars” [Guitar Player magazine]. Eastman quickly followed the release of their archtop line with a compliment of additional hollowbody guitars including the “Thinline” electric and “El Rey Series” guitars.

Having established a footprint in the market, mandolins were a logical next step, given they require the kind of carving craftsmanship Eastman’s builders honed over years of making violins, violas, basses, and cellos. The mandolin line was an instant success, luring the legendary and master of the mandolin, David Grisman, to design exclusive Eastman mandolins. The company’s models grew to include traditional F-type, A-type, Mandola, and Mandocello styles inspired by the Golden Age of American luthiery.

Soon after, Eastman jumped into the flattop acoustic market building parlor guitars, 12-strings, dreadnaughts, orchestral models, jumbos and more. Met with dynamic success, Eastman was encouraged to complete a major expansion with a new factory dedicated solely to their flattop guitar production in 2013.

In the decade since Qian Ni realized he could put his violin-building luthiers’ expertise to work constructing high quality archtops, Eastman Guitars has taught the guitar-playing world that you don’t have to sacrifice craftsmanship for affordability. Since 2011 the company has maintained a quality control team of over 60 employees in its Pomona, California headquarters, as well as in-house setup shops to work on every piece before they ship. More than 50 hands personally touch each instrument before they are completed, adding up to a new Golden Age of luthiery.

To learn more visit them at Eastman Guitars.