Earl Slick on Possibly David Bowie Tour: "Obviously, we want him to" 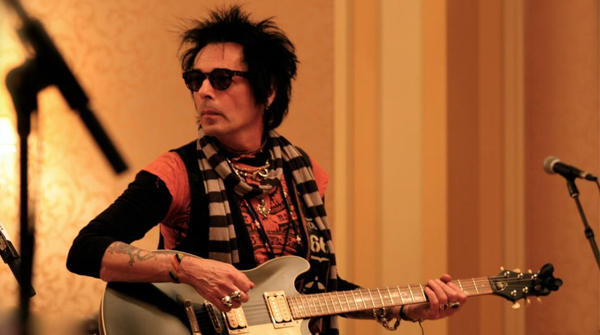 As David Bowie launches his first single inover a decade, his longtime guitar player EarlSlick has revealed that he and the rest of Bowies backingband are eager for him to tour.

In an interview with Ultimate Classic Rock in which Slick discusses the possibilityof future live dates, Slick Said:

"We don't know. Obviously, we want him to. But right now,that's a big if… I could get a phone call tomorrow saying, 'Hey,you know what? Here's the setlist.' I don't know. I can't speak forhim or the organisation. Obviously, the band would love to go out.Even if it's not a huge tour, we would like to go out and do somegigs. But that's yet to be seen."

He also talks of the recording process for the forthcoming Bowierecord, entitled 'The Next Day,' revealing he recording his partslast summer:

"David got in touch with me out of the blue, and he said, 'I'mready to go back in. What are you doing? Are you around? Are youtouring?' I said, 'No, just get me some dates.' We started bangingdates around - and he was already recording - and I went in and didall my stuff in July."

On the record itself Slick said:

"There's a lot of rockers on there, I can tell you that…there's a few kind of really cool mid-tempo ones in there as well,but I'm the go-to guy for the rock stuff with David."

David Bowie 'The NextDay' will be released March 11th in the UK and March12th in the US.