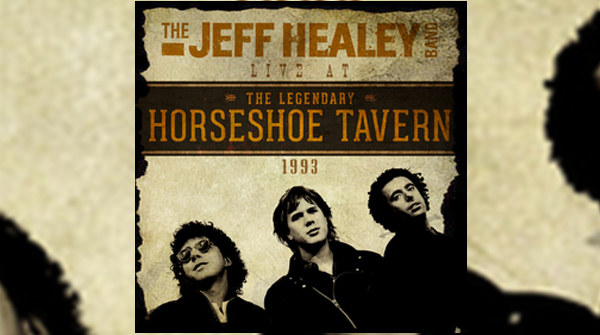 One of Canada's biggest rock exports, The Jeff Healy Band will release Live At The Horseshoe Tavern on CD and Digital Audio via Eagle Rock Entertainment on October 7th 2014.

Live At The Horseshoe Tavern is one of several classic Jeff Healey Band concerts that Eagle Rock has unveiled from the vaults, including Live From NYC (2013), Live At Grossman’s (2011), Full Circle – The Live Anthology (2011), and Live At Montreux (2005).

The band was helmed by guitarist/vocalist Jeff Healey, who lost his sight at infancy. However, one can say that made his sense of sound that much stronger: a masterful musician with a unique style, he championed the lap pedal-steel style of blues guitar. His soulful vocals, instrumental dexterity, and ability to traverse genre styles won over blues and blues-rock fans the world over, until his untimely passing in 2008.

In December 1993, The Jeff Healey Band was completing their tour in support of the recently released Feel This album, which culminated in several nights at the legendary Horseshoe Tavern, in their hometown of Toronto. Embellished by two backup singers and keyboard player Washington Savage, The Jeff Healey Band delivered a homecoming barnburner, blazing with favorites like “See The Light,” “Roadhouse Blues,” and “Baby’s Lookin’ Hot.” Nestled in-between the high-energy set list was a 3-song acoustic set, including “That’s What They Say,” “You’re Coming Home,” and “Angel Eyes,” as well as stellar set-closing covers of “While My Guitar Gently Weeps” and “The Thrill Is Gone.” It was a well-rounded set, made all the more special by performing in their hometown.

Live At The Horseshoe Tavern