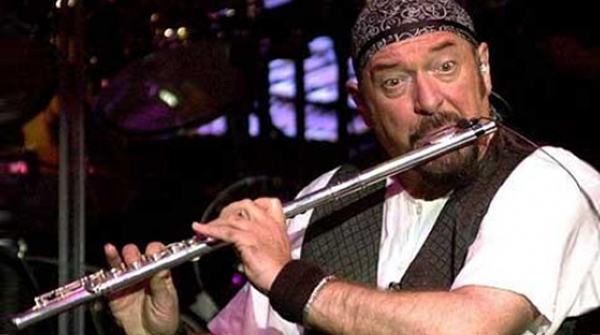 Eagle Rock Entertainmentis proud to announce the issue on June 25, 2013 of Jethro Tull set'Around The World' Live.  This Book + 4 Music DVD set comes indeluxe hardback packaging for collectors and contains a wealth ofpreviously unreleased material.  The release featuresperformances of classic tracks including: 'Aqualung,' 'Cross-eyedMary,' 'Living In The Past,' 'Too Old To Rock'n'Roll,' 'Too YoungTo Die,' 'Orion,' 'Minstrel In The Gallery,' 'Heavy Horses,' 'ThickAs A Brick,' 'Nothing Is Easy,' 'Budapest,' 'Life Is A LongSong' and many more.

This superb set pulls together material from Jethro Tullconcerts across their career and filmed at some of their manystopovers around the globe. It reaches back as far as the legendaryIsle Of Wight Festival in 1970 and as recently as the Estival inLugano, Switzerland in 2005. Much of the material is previouslyunreleased. The set is packaged in a 19cm x 14cm 32 page hardbackbook with 2 discs in each inside cover. Disc 3 of 'Around TheWorld' Live offers an insightful interview with Ian Anderson fromthe Hilversum 1999 session.

The book contains photos from Ian Anderson's personal archiveand a text on all the different shows by Joel McIver. 'Around TheWorld' Live charts Jethro Tull's ever evolving music through bluesto rock to folk to electronica with a frequently changing line-upanchored by the ever present frontman Ian Anderson.

'Around The World' Live charts the global success of one ofrock's favorite acts. Highlighting the band's illustrious careerand phenomenal concerts, this is treasure trove of Jethro Tullmaterial.