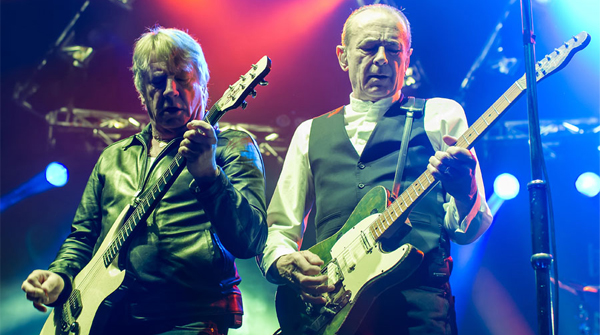 'Bula Quo!' has been inspired by theirincredible adventures filming their first ever feature-film of thesame title. The first disc features nine brand new tracks, writtenas the soundtrack for the duo's madcap escapades in the movie. Disc2 contains exclusive reworked studio songs or live versions of 10classic Quo hits, which are also featured in the film (including anamazing Fijian-style rendition of "Living On An Island").

Status Quo is enjoying an exciting phase in their long andsuccessful career, after the critical acclaim and the supportreceived by their loyal audience for their previous studio albumQuid Pro Quo and the relative tour. The 90-minute action movie BulaQuo! features the band as themselves and stars Craig Fairbrass[Cliff Hanger, Rise Of The Footsoldier, Eastenders] and LauraAikman [Keith Lemon The Movie, Freight, Surviving Picasso] with JonLovitz [Saturday Night Live, The Critic, Friends, The WeddingSinger]. The film was directed by Stuart St. Paul, who has workedon projects ranging from Duran Duran's seminal "Wild Boys" video,to Aliens, Batman and three James Bond films. The movie will hitthe stores and theaters soon after summer.

"Making the film in Fiji was a fantastic experience and wecouldn't help but be inspired by our surroundings," statesvocalist/lead guitarist Francis Rossi. "We had no plans towrite and release a new studio album as well as filming our partsfor the movie, it just happened."

"We hope that Quo fans will enjoy the film, which is certainlysomething new for the band, but we know they are going to love themusic."

As the new material sounds inspired and fresh, it is one albumnot to be missed and the film is destined to become a cult for Quofans. For everybody else… Bula Quo! will "simply" be one of theirstrongest releases ever!