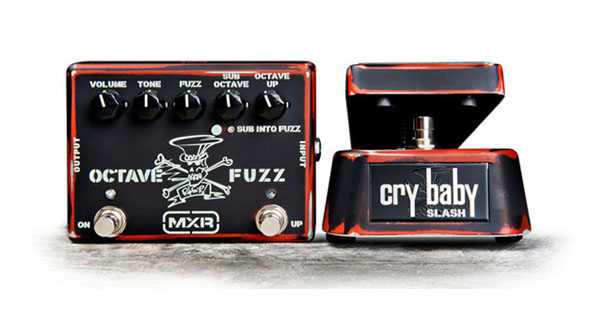 Dunlop and Slash have teamed up to create a triad of products due out just ahead of the guitar legend's latest album release, Apocalyptic Love. With Slash's own experimentation and input, Dunlop created two pedals to complement his raw, expressive sound: the MXR Slash Octave Fuzz and the Slash Cry Baby Classic.

The Slash Octave Fuzz features a searing Fuzz tone coupled with a separate Sub Octave voice and an Octave Up Fuzz, all for thickening up your tone with a sinister growl. With an array of external and internal controls, there are numerous ways to combine the main Fuzz effect's thick '70s shag with the chainsaw grind of the Octave Up Fuzz and the warm growl of the Sub Octave. Internal Gain and Tone pots shape the Octave Up Fuzz effect. Emblazoned with custom Slash graphics, the Slash Octave Fuzz features all analog circuitry, true hardwire bypass and comes in a heavy duty housing with durable jacks and switches.

The Slash Cry Baby Classic is custom-voiced for the raw, expressive sound that influenced a generation of guitar players. Tuned to a lower frequency and featuring a custom-wound resonance inductor, this wah-wah has a huge dynamic range and a wide sweep. Two side-mounted blue LEDs indicate ON/OFF status, viewable from any angle onstage, so you can always tell when the effect is on. The Slash Cry Baby Classic also features high quality components, such as a true hardwire bypass switch and a long-life pot, and comes in housed in a heavy duty die-cast casing featuring custom Slash graphics.

The MXR Slash Octave Fuzz, Slash Cry Baby Classic, and Slash Pick Tin are exclusive to Guitar Center in the US.

For more information go to www.jimdunlop.com