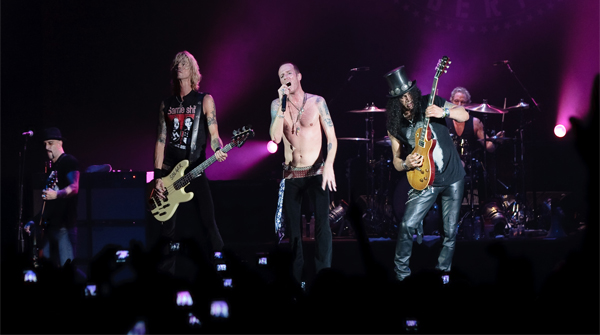 Ever since frontman ScottWeiland returned to his day job with StoneTemple Pilots, the future of DuffMcKagan's Velvet Revolver has beenan uncertain one.

In late 2010 the band, consisting of McKagan,Slash, Dave Kushner, Matt Sorum,recorded a new batch of demos with Slipknot'sCorey Taylor, however the project wasshelved due to Slash's gruelling touring schedulein support of his debut solo album.

The band then reunited at the beginning of 2012 for a tributeevent and fundraiser for the family of composer and musicsupervisor John O'Brien.

In a recent interview with Australia's Faster Louder (via HenneMusic), bassist Duff McKagan was askedabout the current status of the band and on the matter of who willbe replacing Weiland at the helm of the outift, to which Duffreplied:

"I have no idea. I think it's at nowhere. I Think everybodyjust kind of got sick of talking about it, because there's reallyno guy, so there's nothing that me or Slash or Matt [Sorum] or Dave[Kushner] could say that would change the course of this question.So there's nobody now, I think the longer that Slash is outtouring, and that I'm out touring, people will stop asking as much.Maybe once it's settled down, we'll find theguy."

Earlier this year (2012), Velvet Revolverreleased a new live DVD, 'Let It Roll - Live in Germany,'which featured a performance filmed in 2008 at the Palladium inCologne for German TV series 'Rockpalast.'