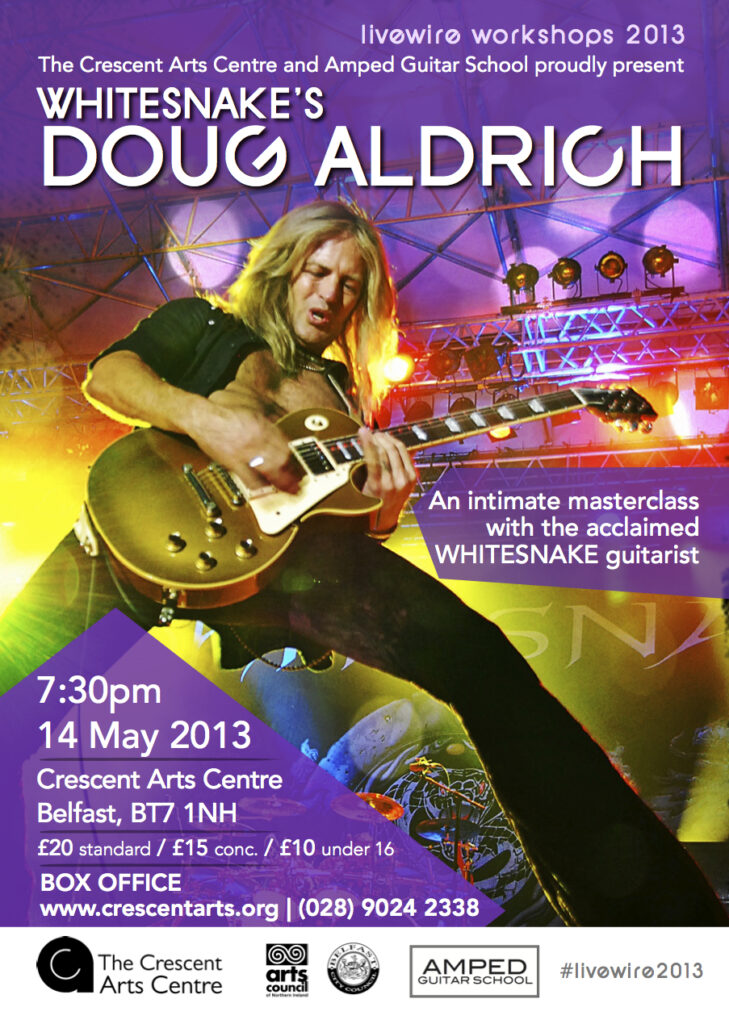 Doug Aldrich has announced a special one-off masterclass in Belfast as part of the Livewire Workshop series. The intimate workshop presented by Amped Guitar School will take place at the Crescent Arts Centre on the 14th May 2013.

For info on tickets visit www.crescentarts.com

Guitarist Doug Aldrich is an ordinary guy with an extraordinary talent. This gifted instrumentalist has spent the better part of his life as a dedicated partner to the six-string, be it Les Paul, Strat or Tele.

A hitmaker overseas and a Top 5 sensation in Japan, LA based Doug realized his love for music at the age of 11 when his older sister turned him onto the likes of Jeff Beck, Stevie Wonder and Peter Frampton. "My little sister had a classical guitar that I was gravitating towards and I started to teach myself on her guitar". A year later Doug received his first electric guitar. A Sears copy of the Les Paul guitar fancied by his early idol Jimmy Page. Later he would replace the copy with a real '73 Gold Top Les Paul.

In his early adolescence Doug formed a band called Purple Haze with his neighbors. As Doug's father moved the family around the eastern US, Doug would form new bands in each city with local players. This was an important time that Doug feels honed his early style. On weekends the band would retreat to the basement, jam and learn the tunes of Zeppelin, Deep Purple and Black Sabbath. Although he enjoyed playing the tunes of these artists Doug's biggest influence came from Jimi Hendrix, Eric Clapton, Jeff Beck and of course Page. Later Doug would also soak in the styles of Gary Moore, Michael Schenker, Ritchie Blackmore and Randy Rhoads.

In the early 80's after finishing school Doug packed his car and  relocated to Los Angeles CA. And found himself forming bands and playing local clubs. In 1982 Doug was pursued by Kiss and found himself auditioning for the lead guitar slot. While Doug admits he was clearly too young and immature for the gig, the experience led to a relationship with Gene Simmons that continues today. The experience was a wake-up call for Doug and he began to work even harder toward his ultimate fate. Once in LA Doug began teaching guitar at a local music store and quickly gained a reputaion as a sought after guitar coach.

As Doug explains, this was also very important. "Teaching was really great for me because I was playing all day long, working on teaching new things as well as the fundamentals. It helped me greatly. I taught 70 kids a week and some of those guys were amazing and would really keep me on my toes."

In 1985 Doug and a high school buddy formed the band Lion with ex-Steeler drummer Mark Edwards and British Tytan singer Kal Swan.  It was through Kal that Doug got his hands on the earlest Whitesnake recordings. Lion made 3 records and had a top 20 video on MTV's Headbangers Ball.

Shortly after Lion broke up Doug worked with bands Hurricane and House Of Lords. Doug gained high marks for his guitar work on these recordings, especially for his rendition of Blind Faith's "Can't Find My Way Home". Although he is not listed on the record, Doug performed 90% of the guitar work on the Sahara record.

In the 1990's Doug and Kal Swan's creative energies joined once again to form the band Bad Moon Rising. The band was produced in Germany at Musicland Studios by Mack who was known for his work with Queen, Rainbow and Whitesnake. The band recorded several records and toured in both Europe and Asia, enjoying great success in Japan.

During this period Doug had an opportunity to exhibit his extraordinary guitar talents with the solo albums "High-centered"  and "Electrovision" produced by Andy Johns of Led Zeppelin fame. With an ear towards expanding limitations, Doug ventured into new territory in both songwriting and sonic textures and more tribal syncopated rhythms. Doug made an effort to try new things such as experimenting with various stomp boxes and different guitars to ellicit and break standard barriers. A sound purist, Doug's key quest would be to combine the output of a myriad of guitar pedals to test the limits.

A veritable virtuoso on the six-string, Doug's passion and sensitivity towards music can only be explained and described with his chosen instrument. His variety of guitars consists of mostly collectible guitars including a few rare Les Pauls and Fenders. Similarly, his cache of amps is equally impressive ranging from vintage Marshalls and Fenders. His main amp was purchased in 1981, and is still his main amp in the studio and live. He has blown up this particular amp several times only to have it resurrected for another play. Doug gives names to all his favorite guitars and amps, and named this amp "Spewy" after one fiery blowup!

Doug's personal record collection is extensive and ranges from old blues and jazz to contemporary music. "I love all kinds of different music. Sometimes it could be Count Basie and Duke Ellington or depending on my mood, new stuff like Foo Fighters or Coldplay. Musically I still love old rock best though. Don't wanna ever lose my roots".  Not one for following trends, Doug knows what he likes and prefers to stick to what he does best and does it to the best of his ability.

In 2001 Doug accepted a request to join Ronnie James Dio's band Dio and record the "Killing The Dragon" record. Although Doug came into the fold at the end of writing the record, two of the album's strongest tracks were written by Doug and Ronnie at the last minute. Once again Doug was rated highly for his work with Dio by press and fans alike.

2002 was a busy year in which Doug toured the world with Dio, supporting several of his  favorite bands including Deep Purple. One highlight was in Germany when Doug was asked by Deep Purple's Steve Morse to join the band onstage to perform "Smoke on the Water".  Dio recorded a live DVD and record called "Evil or Divine" which shows for the first time the ferocity of Doug's onstage playing.

While on tour fate finally kicked in when Doug was contacted by David Coverdale with an offer to join the reformed Whitesnake and tour in 2003. Doug eagerly accepted the offer after an initial meeting with David. "I was blown away by that! David is the ultimate singer for me, his voice is thick as molasses. He is an amazing songwriter and I knew this was a chance of a lifetime". In 2003 Whitesnake began a nine-month world tour that helped meld the band into one of the best versions of the lineup to date. In 2004 Whitesnake captured this lineup on the "Live In The Still Of The Night"DVD. The DVD is a perfect representation of David and the band and leaves you wanting more. The award winning DVD was voted best live DVD of 2006 by UK's Classic Rock Magazine, and also garnered gold status in several countries including Germany.

During the first few years of Doug's tenure, there was great bonding time for Doug and David. Doug soaked up everything David could teach. The two spent much time together on and off the road which led to the start of a musical collaboration between the two. The first fruit of their writing can be heard on 2006 "Live In The Shadow Of The Blues" record. The record features many Whitesnakes classic hits and finishes off with four new songs which the band released on SPV Records worldwide.

These new songs were the catalyst of a great partnership for Doug and he immediately began preparing new ideas for David. The two took several months in early 2007 to write and create what is destined to be a Whitesnake classic album in itself. "Good To Be Bad" is 11 brand new songs and the start of an exciting time for Doug. Doug describes the process best. "Good To Be Bad was a total commitment and we were very focused from the start. David and I started preparing the songs in early'07 and got on a really good roll. We spent a lot of time discussing what David wanted to accomplish and part of my goal was to help him see that through in whatever needed to be done. I feel the new record covers a lot. David sounds just amazing on this! We had a great time writing together and you can hear that in the record. It was very rewarding to see the songs develop. I'm proud to be a part of this record".

In 2011 Doug pursued his close collaboration with David by co-writing and co-producing Whitesnake's latest studio opus "Forevermore". Their partnership carried on outside the studio as well, with an extensive world tour covering nearly all continents.

While Whitesnake went on hiatus in 2012, Doug put together an impromptu jam band playing covers of some of his idols' material (Hendrix, Zeppelin, Purple, etc.) with two of his then-Whitesnake brothers-in-arms, Michael Devin and Brian Tichy. They had several successful runs in the UK and Europe culminating with a few intense sold-out shows in Cyprus and Greece.

2013 is shaping up to be a stellar year for Doug. Whitesnake are releasing live DVDs and albums where Doug shines not only as a super talented axe-meister but also as co-composer and co-producer. A new world tour will showcase material from Whitesnake's extensive discography. But more importantly, Doug's band Burning Rain has finally completed their third Album "Epic Obsession" which will give his fans another opportunity to enjoy and appreciate the many facets of this multi-talented artiste.