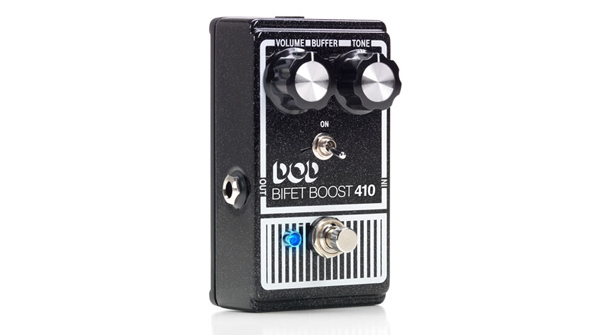 New from Harman's DigiTech is the DOD Bifet Boost 410, a pedal with a difference.

(PRESS RELEASE): Harman’s DigiTech today announced the introduction of the DOD Bifet Boost 410, a guitar volume boost/EQ pedal with a twist – the new Bifet Boost 410 features a Buffer On/Off switch that takes the built-in buffer in or out of the circuit to deliver the best-possible performance from wherever the pedal is placed in the player’s effects chain.

“Some players like to use their pedals in true bypass to maintain a pure signal path throughout their pedalboard, while others like a pedal with a buffer to counter the signal loss of boards that are packed with a lot of pedals,” said Tom Cram, marketing coordinator, DigiTech.

“The Bifet Boost 410’s selectable Buffer On/Off makes it adaptable to any player’s setup and sonic requirements.” In addition, the selectable operation enables the Bifet Boost 410 to be used as the first pedal in the chain in front of a fuzz pedal – many fuzz pedals don’t sound right or react properly to a player’s changes in guitar volume with a buffered pedal in front of the fuzz.

The DOD Bifet Boost 410’s Volume control can deliver up to 20dB of clean boost–enough to add anywhere from a hint of grit to a huge 20+dB of boost to hit the front end of an amplifier and drive an already cooking tube amp into distortion. More than just a straight volume boost pedal, the Bifet Boost 410’s rotary EQ Tone control can tailor the sound from dark and sweet to bright and sparkling and everything in between.

The Bifet Boost 410 also works well as an “always on” pedal to create a “bigger” tone with greater touch sensitivity. Many experienced players will find that using the pedal this way enables them to get an expanded range of dynamics, tonal shadings and overdrive flavors simply by adjusting their guitar volume knob.