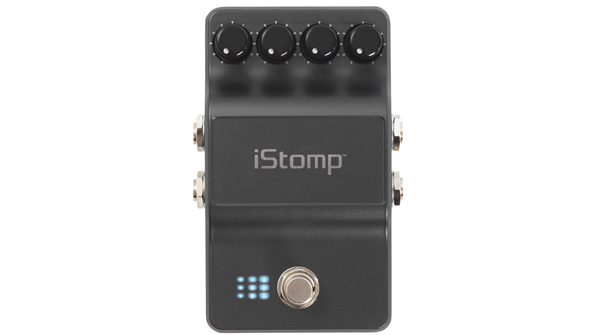 DigiTech today announced it is now shipping its iStompProgrammable Pedal, pre-loaded with 10 of its most popular e-pedalsand now features an updated Stomp Shop app where guitarists areable to try any pedal for free for up to five minutes.

"When we introduced the iStomp we led a new product categorythat changed the way guitarists and musicians thought aboutcreating their tone. With each new e-pedal introduction we haveexpanded their capabilities and brought a new level of utility andfunctionality never before available. The addition of eight moree-pedals included with the Stomp Shop update underscores ourcommitment to continuing to improve our offerings in thedownloadable pedal category," explained ScottKlimt, marketing manager for DigiTech.

The iStomp pedal, which easily connects to an Apple iOS deviceusing the DigiTech Smart Cable that comes with the iStomp, offersendless options when testing unfamiliar sounds. With four knobs tocontrol effects parameters that change their function according towhich effect is loaded, every musician can create his or hersignature sound.

The DigiTech iStomp sells at a suggested retailof £139 RRP inc VAT and comes with an iOS authorization cable andpower supply, with e-pedals available from £2.99.