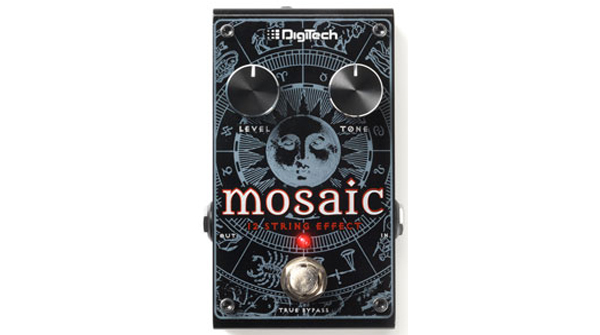 A 12-string guitar features two courses (pairs) of six strings tuned either in unison or an octave apart, doubling each string of a standard six-string guitar to give a 12-string a fuller sound with a bell-like sparkle and a natural chorus effect. The Mosaic utilizes advanced polyphonic pitch shifting and “intelligent” doubling algorithms to approximate the sound of a 12-string using any electric or amplified acoustic guitar.

“The Mosaic is ideal tool for live performing since it frees guitarists from having to change guitars when they need a 12-string,” stated Tom Cram, Marketing Manager, DigiTech. “Its lush sound quality also make the Mosaic perfect for studio use.”

The DigiTech Mosaic features a Level control that adjusts the amount of the 12-string effect intensity, and a Tone control that shapes the overall brightness of the effect. Whether playing single notes, arpeggios or full chordal strums, Mosaic tracks every nuance of a player’s picking and dynamics, to deliver rich harmonic complexity with crisp octave shimmer and balanced low-end response.

The Mosaic offers true bypass operation, which keeps the unaffected tone of the instrument intact when the 12-string effect is not in use. The Mosaic has a compact, pedalboard-friendly metal enclosure, includes a power supply, and features a bright red LED for easy visibility on any stage.

The DigiTech Mosaic Polyphonic 12-String Effect Pedal will be available as of December 2014.