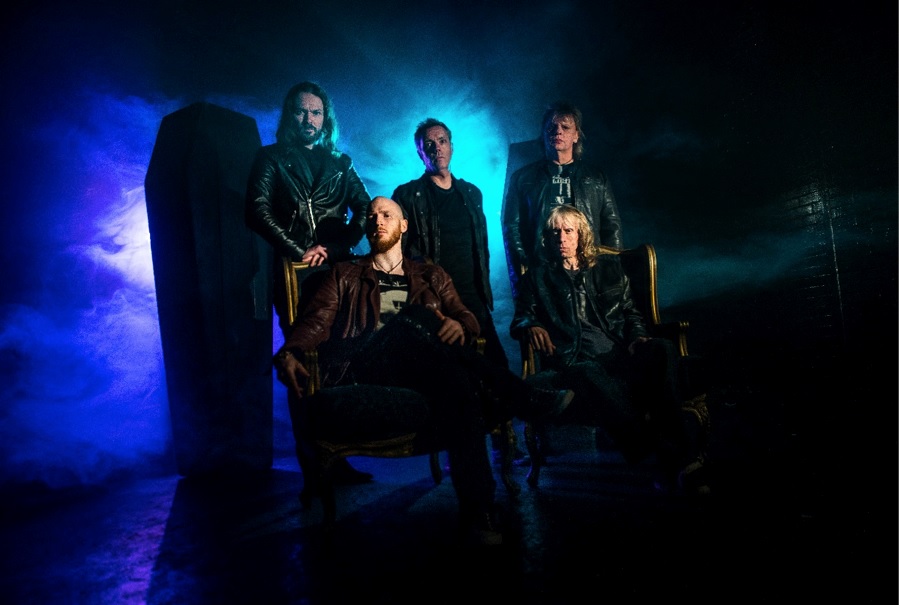 New Wave Of British Heavy Metal pioneers DIAMOND HEAD will issue their anticipated new full-length, The Coffin Train, May 24th via Silver Lining Music.  At once fresh and exuberant while also being a stone-cold classic slice of old-school heavy metal excellence, the record is packed with the sort of riff-fuelled power that founding member Brian Tatler led a genre and influenced the odd band or two with.

To mark the full-length release, the band has released the highly anticipated and thought-provoking video for the title track, The Coffin Train; produced and animated at All 4 band Motion & Design Studio under the visionary direction of Maria Goruleva, the video is now available at this location.

On the track, Brian comments: “I am very proud of this song and it’s my favourite from the new album.  It is one of the best songs I have ever co-written and cannot wait for people to hear it.  I love dynamics and mood changes in songs and this has it all for me.  From the clean, tension building verse, stepping up for the bridge then dropping into a massive heavy chorus.  At just over six minutes it’s an aural feast”.

“Easily the best song on this record.” continues Ras“We put so much effort into making this a true Diamond Head song from start to finish and we hope our fans feel the same.”

“Pure Class, slows the pace down. Fans and Newbies will appreciate the choice of Brian’s guitar work. Guitars, Groove, Harmonies and Hooks abound, as this track rumbles along until it reaches its thundering finale.
Take a seat…” concludes Karl Wilcox.

and "Belly of the Beast"

The Coffin Trainwill be released via Silver Lining Music May 24th. For pre-order options, go to THIS LOCATION.

Formed in 1976 under the riff-rolling leadership of guitarist Brian Tatler, DIAMOND HEAD would quickly establish themselves as a vanguard of the exploding New Wave Of British Heavy Metal scene. With their genre-defining debut album Lightning To The Nations, DIAMOND HEAD became the band who influenced and opened gates for many metal bands.

The Coffin Train, DIAMOND HEAD's eighth studio album, is a glorious testimony to Brian Tatler and Rasmus Bom Andersens' masterful ability to create the flavours necessary for prime DIAMOND HEAD music. The record was recorded in several different places. Guitars, bass, and vocals at Vigo Studios in Walsall and drums at Circle Studios in Birmingham. The album was produced and mixed at Ras' Raw Sound Studio in London.

When it comes to the concepts behind TheCoffin Train, Tatler left the heart to Ras, who being a thinker and life-conceptualizer, doesn't lack sources of inspiration. DIAMOND HEAD have not only managed to create an album of pure heavy metal intensity, they have created a timeless aural statement which feels destined to see them delivering both TheCoffin Train and DH 2.0 to more fans than ever.

DIAMOND HEAD will be touring Europe in the coming weeks and are confirmed on the line-up of two very special UK shows with NWOBHM giants, Saxon, which will take place on October 19th at the legendary Hammersmith in London and October 20th at the O2 Apollo in Manchester with additional shows to be announced soon.

"...a great album with superb guitar work, a tight rhythm section and vocals that soar like an eagle." -- The Rock Pit