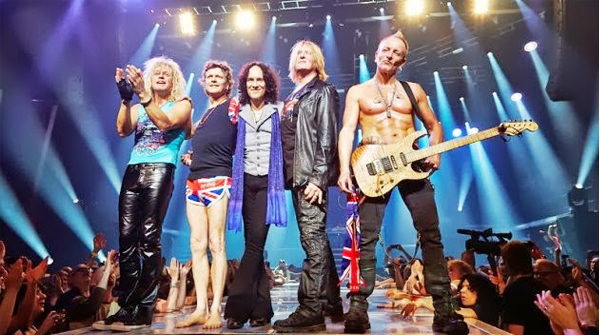 A new DVD which features Def Leppard’s recent La Vegas residency in full has been announced and is scheduled to arrive on October 21st.

Culled from a number of performances shot during the British-American outfit’s 11-night Vegas stint, Def Leppard Viva! Hysteria Concert features footage of the hard-rock legends playing the 12-times-platinum Hysteria LP from beginning to end as well as classics such as ‘Rock of Ages’ and ‘Photograph.’

“We’ve been asked for many years if we’d ever do it, and the answer was always ‘no’ because we’d be out promoting a new album.

“Then in March and April 2013, when we had no new music to promote, we had a chance to revisit arguably our most important album. It was an easy decision to make.

“As for Vegas, it’s no longer perceived as the place crooners go to die – Motley Crue, Elton John, Guns n’Roses and Cheap Trick have recently done residencies. Rock’n'roll has definitely moved in; there was no better place for us to take the show. It was a fantastic experience for us and for our fans.”

Viva! Hysteria will be available in CD/DVD, Blu-ray, DVD and digital formats. Cinema showings are being planned and will be announced in due course.