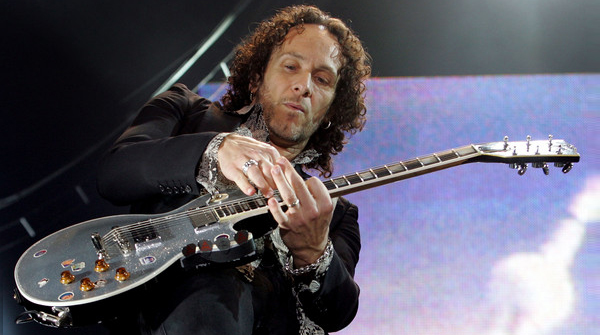 Def Leppard's VivCampbell  has revealed he has been diagnosedwith Hodgkin's Lymphoma.

Viv is currently two months into a six-month term of chemotherapytreatment and decided to go public with the news so fans aren't tooshocked by his appearence when Def Leppard next head out ontour.

"I feel fortunate that my cancer sent me an alarm call inthe form of 'the cough that wouldn't quit'," says theCampbell.

"Otherwise, how would I have known?"

"After several months of trying every inhaler known to man,my doctor finally had me X-rayed. A CAT scan revealed that enlargedlymph nodes were doing wrestling manoeuvres on my windpipe - hencethe cough. What was causing the enlarged lymph nodes, however, wasyet to be determined, so I underwent a surgical biopsy on March 11,the first day of Leppard rehearsals for our Viva Las Vegas shows.Obviously, I didn't make it to rehearsal that day, but it's okay; Iknow the songs by now!"

"I'm feeling rather spiffy, all things considered," hecontinues enthusiastically. "Hodgkin's has an over 80% curerate - so by my reckoning, if you're going to have a cancer,Hodgie's is the one to have! The reason I'm sharing this with youis because, despite cancer and chemo, me and my new aerodynamichairstyle (read: no hair) are going on tour this summer. I don'twant anyone to be so shocked by my new look that they ask for arefund. Simple economics, really.

"I look forward to a summer full of shows with both DefLeppard in June/July, and the debut of Last In Line thisAugust."

Over the years Campbell has built an impressive CV afterspending time with legendary outfits suchas Dio, Whitesnake,Thin Lizzy and of course DefLeppard.