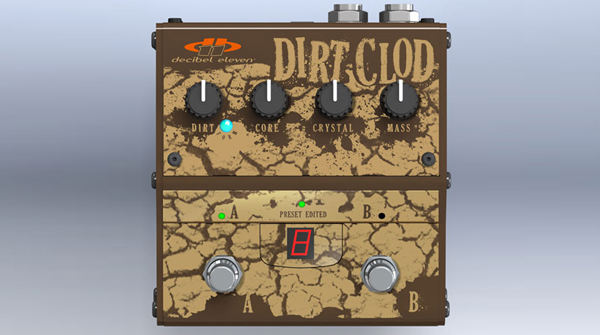 Decibel Eleven is a Southern California based company boasting an esteemed team of engineers dedicated to sound quality and design. In the past DB-11 has designed for globally renowned brands such as Alesis, Voodoo Lab, Gibson Audio Labs and Line 6 to name a few. Now they have released their own effects pedal, the Dirt Clod Overdrive.

“As our first official Decibel Eleven guitar effects pedal, we understood that aside from providing unique memory presets, the sound quality of the overdrive distortion had to be exceptional,” stated Chris Hern, DB-11 vice president of product development. “Guitarists of various styles and genres have provided phenomenal feedback, confirming that we accomplished our objective.”

With the Decibel Eleven Dirt Clod, players may easily save presets and recall as needed by accessing two different presets side by side, or use the bank mode to scroll and select presets. Full MIDI capabilities allow the Dirt Clod to be used with the simplest MIDI controller for automatically recalling presets or bypassing the pedal. MIDI expression pedal data can control any of the Dirt Clod parameters in real-time, allowing guitarists ultimate control to adjust distortion while playing.