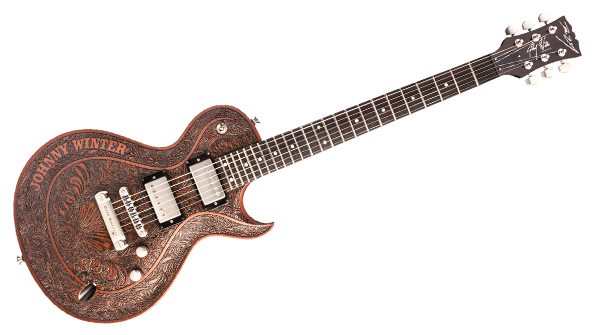 (PRESS RELEASE): Dean Zelinsky Guitars’ President, Dean Zelinsky, announces today the release of the Johnny Winter Signature Guitar. This is the same guitar made by Zelinsky that Winter had been playing and touring with in his most recent years, until his untimely passing in July, 2014.

The First 25 Signature Guitars will be hand signed and numbered by Dean Zelinsky and come with a Certificate of Authenticity signed by Zelinsky and Johnny Winter’s wife, Susan Winter, for the Johnny Winter Estate.

“I am excited to be building Johnny’s Signature Guitars,” stated Zelinsky.

“Johnny had been my guitar-playing idol since I was a kid, and was clearly one of the greatest players of all time.”

Zelinsky went on to say:

“While I had met Johnny briefly many years ago, I first started building guitars for him after a chance meeting in a club parking lot in 2011. I had been designing thin guitars for a few years and knew this ultra-thin single cut was going to be perfect for Johnny. I put everything I knew he would like into this guitar, and then engraved the hell out of it including Johnny’s name prominently embossed. He told me it was the most beautiful guitar he had ever seen and started playing the guitar almost exclusively. Johnny and I later spoke about the signature line and entered into a formal agreement shortly before his passing.”

"I am extremely pleased that Johnny's dream of having this signature guitar come out has finally become a reality. Johnny switched to this model 3-years before he left us and just loved it's playability, tone and style. It was truly his main guitar."

Zelinsky launched his new line of Dean Zelinsky Guitars in August of 2013 through his ecommerce website.