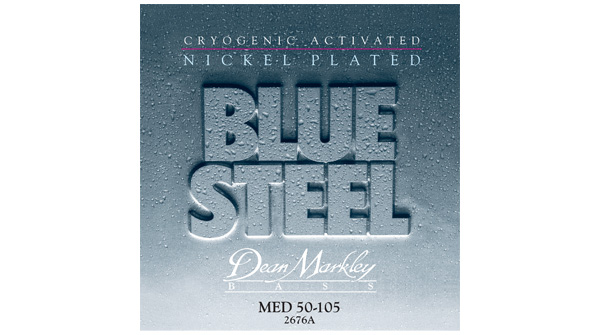 The Blue Steel Nickel Plated bass strings are the string of choice for some of the world's biggest bassists. From Tully Kennedy of the Jason Aldean band to Tyson Ritter of The All American Rejects and a host of legendary session players in between.

(PRESS RELEASE): For decades, the Dean Markley Blue Steel strings have been noted for the cryogenically frozen production process to prolong the life, tone and durability of the string. During that time, the stainless steel strings have become one of the top selling and most recognized string of all time.  World renowned musicians of multiple genres have performed and created some of their best work using these strings.  However, in the far corners of the factory hide a variation on the strings that up until now, was not publicly promoted and very hard to come by.  Previously only available to top shelf artists and exclusive dealers, Dean Markley USA is officially launching the Blue Steel Nickel Plated bass strings.  By using a nickel plating, the strings will offer a warmer, clearer tone all while still maintaining a longer life of the string.

Inspiration for cryogenically freezing strings came from an article in Popular Mechanics magazine. The article went in great length about how die and tool manufacturers where now cryogenically freezing their product so that they would last longer.  Even more significant, the process even enhanced the performance of the products.  “Better performance?  Longer durability?  These are the things consumers were asking about for years.  It just made sense that this was something we had to get into.  We tried it! They tested wonderfully.  We started showing them to our artists and the rest is history,” adds Dean Markley, partner of Dean Markley USA.

Nickel has long been sought after by bassists in pursuit of the ultimate tone.  But the soft nature of the nickel material made the string susceptible to a shorter life span.  The cryogenic freezing process fixes that problem without affecting the desired tone of the nickel.  Besides being easier on the frets and gentler to the touch, the nickel creates less distortion allowing tone aficionados to clearly distinguish notes within a studio environment or when playing on stage to thousands of people.