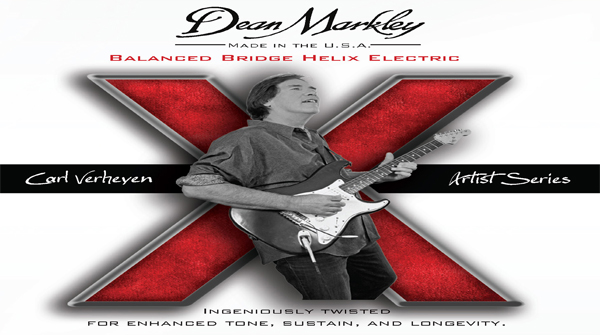 Carl states the goal in his string selection: "Leo Fender'soriginal patent diagram shows the Stratocaster bridge floating, andhe intended it to be played this way. Some of us more devotedStrat-style players have found a very musical end to thisinvention, by setting specific intervals for each string and usingthe bar to achieve melodic lines with the confidence of bothknowing those intervals and a guaranteed return to pitch. Thesestrings make that goal possible."

The Helix string uses a precise elliptical shape for the windingwire. The shape then had to be paired with the correct windingprocess. The hyper-elliptical winding process results in anincreased number of wraps along the length of the string. Thisincreases the mass of the string, without changing its diameter ormaterial. More mass makes a fuller tone; more windings give asmoother feel as well as a brighter, more resonant tone. Additional benefits of the hyper-elliptical windings are a relaxedfeel and less unwanted noise.  The strings last much longerwithout sacrificing tone and performance.

Carl explains the concept and methodology in greater detail: "Mygoal was a strong, solid bottom end that would also react to theback pickup and become twangy when needed. The integrity of a .037A string seemed to beef up the bottom, and the smoother finish ofthe Helix winding assured a fast playing surface. Next Iconcentrated on the top three strings. I do a lot of 1st fingerbends on the high E string, so to insure there was still flesh onthat fingertip at the end of a gig, I went with a .009 for the highE. The B string is where I experiment.

spring tension on the underside of the guitar. In the end, Ifound that by utilizing Dean Markley's special Gold Series treblestrings, the tension was a bit lighter than the same gauge in theusual tinned, plain strings-subtle, but just what was needed forperfect balance and feel. When the gauges are right the bridge isbalanced, which guarantees tuning stability. And with the springsadjusted correctly I get a return to perfect pitch for eachstring."

The Carl Verheyen signature set offers his choice of customgauges:

Carl Verheyen is an accomplished guitarist with a multi-facetedcareer spanning 40 years.  While considered a guitar virtuoso;he is also a producer, educator, arranger, vocalist, songwriter,session player and studio musician.  His exceptional talentand expansive career brings numerous accolades from the musicindustry.  He has been named "One of the Top 10 Guitar Playersin the World" and "One of the Top 100 Guitarists of All Time".