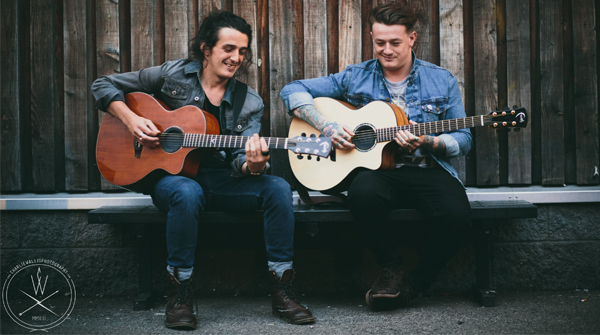 (PRESS RELEASE): Brothers, James and Matthew Veck-Gilodi have chosen to play Faith Guitars all throughout this past summer’s festival season and beyond. Frontman, James plays both a FV12TB 12 string Trembesi Electro Cutaway and an FNCETB Trembesi Neptune Electro Cutaway. Main guitarist, Matthew plays an FNCEMG all mahogany Neptune model .

“It’s great to have James and Matty on-board,” says Alex Mew, Faith Guitars’ brand director. “I’m a big fan of Deaf Havana, and it’s great to see them riding high right now. Their set at recent festivals has been immense, and my enjoyment has been somewhat heightened by the use of two of their Faiths! I look forward to seeing their upcoming acoustic shows too.”

The signing of Deaf Havana comes as part of a raft of new British and American talent chooses to move to Faith Guitars. Among them are festival favourites Circa Waves, the much touted UK rock band Darlia, US country veterans Shenandoah and many other.

Since forming in late 2006 in Kings Lynn, Norfolk, Deaf Havana have played show after show, playing to ever increasing crowds throughout UK and Europe. In 2008 they signed to A Wolf At Your Door Records and sharply released their critically acclaimed debut EP ‘It's Called The Easy Life’. They toured this record extensively gaining mass coverage, everything from Metal Hammer magazine to Kerrang TV.

In 2009, the band completed work on their debut full length album ‘Meet Me Halfway, At Least’, an absolute ball rockin’ record. The departure from their previous southern rock swagger is apparent, as the band didn't wish to be stagnant or pigeon holed into a dying scene, when they are clearly capable of much more, every song on the album is as catchy as the next, and still as rock as ever.

The band were also Nominated for the Kerrang! Best British Newcomer Award 2010, and released the Rock Chart-topping album, ‘Fools and worthless Liars’ in 2011, with a re-released version in 2012.

Already having opened for Bruce Springsteen and Muse,played countless 2014 festival main-stages and completed their own sold out headline tour they are now on album number 4... and were also award the Best Video Award at the Kerrang Awards 2014.