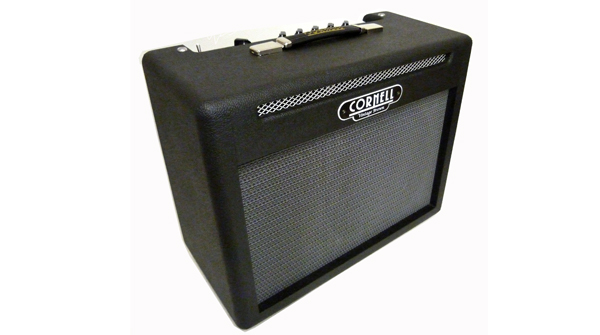 (PRESS RELEASE): The new 10 watt 1x12 all valve 'Vintage Brown' reverb combo from British amp maker Denis Cornell, honours the tone that guitarists craved for during the 1980's and has remained a bench mark for many guitar players ever since. A sound and tone referred to as the Brown Sound, when pointy headstocks, unfinished maple necks, and endless string tapping solos led the way.

Unlike the common trend where many modern amplifiers incorporate multiple valve stages to create high gain levels, the Vintage Brown 10 combo has an enormous amount of gain just in the first stages of amplification. This enables the Vintage Brown 10 to accurately emulate the 80's phenomenon by controlling the amplifier's output power, linked to the pre amp gain. The benefits are twofold.

The top-loaded, rear control panel features Gain and Volume controls which act accordingly with each other to achieve the desired amount of distortion and output levels, whilst a very handy 'GAIN OUT' switch defeats the Gain control and sets the gain to maximum at any volume level. The guitar now controls the amount of gain, up full for 80's soaring overdrive and backed off for Cornell's renowned sparkling clean overtones.

Like the highly successful Cornell Romany and Plexi combos, the Vintage Brown 10 also incorporates output attenuation between an 1/8th of a watt to a full 10 watts in four controlled stages. This not only allows the amplifier to be overdriven at lower output levels, but a wide range of distorted overtones can be achieved utilising both pre amp and output distortion. Controls are kept to minimal Gain, Volume, Treble, Bass and Reverb, with a mini toggle switch offering a fixed boost in the mid range.

Whilst Denis Cornell's goal has been to successfully distil the 80's experience, the Vintage Brown 10 guitar combo - finished in black Tolex, grey grill, Cornell branded handle and loaded with a single Celestion V12 speaker - is also a joy of joys for all guitar toneheads, with a wide tonal range from clean fingerpicking, crunchy blues to shred rock, offering exceptional dynamics for single coil or humbucker loaded guitars.