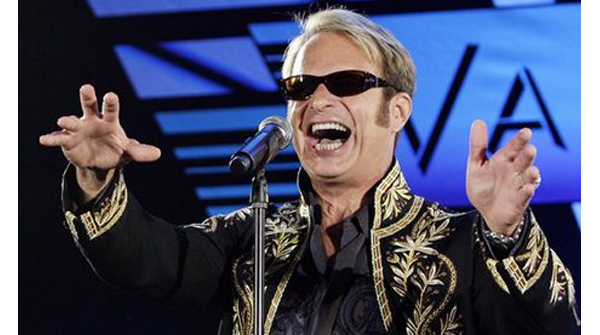 Van Halen frontman David LeeRoth has spoken openly and rather frankly to Rolling Stone on the future of the hard-rock giants and hisdesire for bassist Michael Anthony to return tothe fold to complete the classic line-up.

"Ed has his own vision [for the band's future], I'massuming," begins Roth. "We haven't really been able tospeak about it and it's a disappointment, just as not having achance for a reunion of the original band. Clearly, vocals areevery bit as much a component of success as a rhythm section or aguitar solo, and there's an old expression saying, 'They don't gohome singing the lighting show, they don't go home singing theproduction.' You're right, they sing my words and my melodies. Andwhat we have at our fingertips is arguably one of the greatest hightenor voices ever - that was in Michael Anthony. In our tiny littlecorner of the universe, that voice is as identifiable as the highvoice in Earth, Wind & Fire, as identifiable as the high voicein the Beach Boys. Van Halen is an indelicate house blend of both -that's intentionally. So I would always look forward to thatreunion, and I would always look forward to writing a whole varietyof material."

"I would certainly look forward to working with Ed on somenew material, but we have yet to do that," Davecontinued.

"Almost all of the music that you hear on our most recentalbum [2012's 'A Different Kind Of Truth'] was written and demoedbefore the first album. And I would certainly look forward towriting a whole list of songs with Ed, but we haven't found thetime to do that [laughs]. You hear the tone. I'm not sure what's inEd's mind at this point. I'm gonna guess that his plans are towrite with his son [Wolfgang], and I'm not sure where that actuallyleads. But truth be told, Edward and I haven't written a new songin 20 years … Wait, what am I saying? 'Stay Frosty' is brand new,and I wrote that whole song myself. I wrote the chord structure,played the guitar, the vocals, etc."

Roth speaks at length about his frustration with Van Halen'sfailure to tour worldwide, including playing festival shows aroundthe globe.

"Alex [Van Halen] and I have been begging to becomepart of that [circuit], and Glastonbury and Reading and HydePark," explains the singer. "We keep being shuttled intothe heavy metal world, and that's a very exclusive neighborhood,but here we are - we're back knocking on the doors begging forBonnaroo and begging for Lollapalooza and Coachella, not even as anadvancement of career, but there's a whole new audience who doesn'tknow and doesn't give a shit about Van Halen, and that's exactlythe best audience to sharpen your spirit on. That will compel youto the very best that you have. I can't wait for thoseopportunities and wish us well. We've been asking for those showssince I've gotten back with the band six years ago, and I'll bevery curious to see where we wind up come next season."

Van Halen have three rescheduled Japanese showsplanned for June, although Roth, who is currently living Tokyo, iskeen on more dates.

"There's nothing on the ticket as far as travel, and that'sa disappointment, frankly," adds Roth. "How long have Ibeen back with the gang? Maybe six years, we'll say and we have yetto travel to Europe, South America, Japan, anywhere outside ofthose basic 50 cities in the United States. And again that's been adisappointment. We have an audience and we have a potential futurein many, many places, but our story is one of a whole lottaShakespeare going on. And I don't know where the Van Halen futurelies aside from the States. We'll always be able to play our hits -and keep in mind we have more hits than Beethoven, we have morehits than Tony Soprano - so getting onstage and playing that isglorious, and certainly getting onstage with the brothers willalways be an excitement for me. But in terms of taking the musicpast where we found it, I'm not sure where that's going togo."