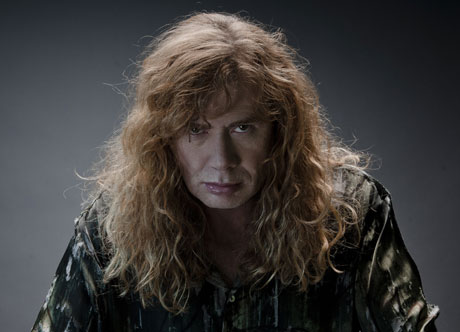 Megadeth head Dave Mustainehas updatedfans on the current condition of his voice afterrecently being diagnosed with a cyst on his vocal chords.

The metal legend took to Facebook to update his army of fans, or'droogies' as he refers to them, on the situation as well asissuing a vow to cut down on swearing whilst on stage.

See the full statement below.

"I wanted to check in with you as I get ready to starttracking my 14 Megadeth record. For some of you that are new fans;the word 'Droogie' may seem a strange way to start a letter, but itmeans 'friend' supposedly in Russian slang. I got the idea to callyou that from watching Alex from 'A Clockwork Orange' call his twoco-conspirators that. So, now you know I ain't calling you"druggies." Onward to the update.

"Last Thursday I went to see an ENT (ear, nose, and throatDoctor), to find out the status of the damage to my vocal chordsthat they discovered prior to my surgery, and my neck from afterthe surgery. I was told during the first MRIs that I had a cyst orsomething on my vocal chords, and I didn't give it anymore thought,because the fusion was way more important.

"I still find it laughable that someone I know said I was ap-y while lying in an ER awaiting spinal surgery for contemplatingcancelling the BIG 4 show in NYC. I guess the old saying, 'You spotit - you got it!' applies here, except I don't want to offend ourfemale fans by comparing this excrement to a body part oftheirs.

"I walked away from the surgery, which was done after theconcert (who's the p-y now?) and was a complete success, thinking Ihad nodes or polyps or something, and I wanted to wait until a yearafter the surgery to go get checked, because I just didn't want togo under the knife again that soon, if of course I had too. ThankGod I don't.

"Fortunately, if you can say that, my problem with my vocalchords is treatable, and it is just a matter of exercise, diet, andeating habits. I started drinking Aloe Juice, taking a tablet formy stomach, and I have to cut out some things I like. Coffee is oneof things, but since I am not a cheerleader for overpriced -overrated Starbucks, like Thor and Junior, I am not taking this toohard. I am bummed about no chocolate (I love chocolate!), andtomatoes (no spaghetti or pizza), but I am loving this 'Countdown'20th Anniversary tour, and with the new record starting next week,singing is more important to me than ever.

"Thanks for all of your support through this whole ordeal,and I really, really look forward to seeing you at some pointbefore the end of the year. Check out our support band Kyng andlemme know what you think. I like 'em and I hope you willtoo.

"One last thing, I don't generally watch video of myself,unless we are mixing or editing something, and over the last fewmonths I had to; for one reason or another. I am really embarrassedby how much I swear or swore on stage and in interviews. I'm not aprude, but I am sorry for my language and some of the offensivewords I chose to say. We all have said stuff we regret, and while Idon't 'regret it' I do feel that you deserve better fromme.