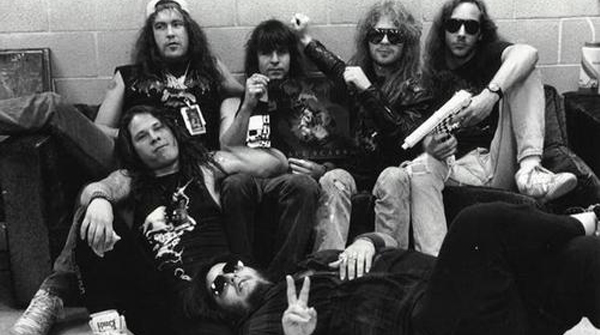 After forming in 1981, Dark Angel went on to release four albums before eventually parting ways a little over ten years later. In 1986 the band released their second studio album Darkness Descends, widely considered as the band’s breakout release.

Like many early eighties thrash outfits Dark Angel hailed from San Francisco and played their own part in the Bay Area thrash movement. Renowned for their dramatic and excessively fast and lengthy compositions the band achieved global status and toured extensively in their first ten year tenure.

After disbanding in 1992 Dark Angel reformed in 2002 with a new line-up. However, new vocalist Ron Rinehart was forced to cancel following a vocal condition, subsequently bringing an end to the reunion.

Now, some thirty years after first forming founders Doty and drummer Gene Hoglan are now discussing the possibility of a reunion.

“Howdy everybody. Now that I’m off the road for a few minutes, I’d like to address these Dark Angel rumors that are flying around,” begins Hoglan.

“Yes, we have been talking about doing something next year, and although it looks like possibly some festivals could be in the works, right now it’s just speculation. Don Doty and myself have been in contact for the first time in many many years, and it’s been great to re-connect with my old friend. Fortunately, I’ve remained great buddies with all the DFA guys after all these years, and we do try to stay in contact with each other and see each other when we can, especially since we are all spread out over the Western US. We are indeed discussing the possibility of a reunion, and yes, the DFA guys are well aware of all of my other commitments, such as Testament, Dethklok and the like. So again, we are moving forward s-l-o-w-l-y, with hopes to getting Dark Angel’s wings off the ground for festival season in 2014.”

“Members of Dark Angel are currently sitting down for talks for a reunion. This will be for the year 2014. All are excited. I was talking on a radio show recently and had said that all members would be attending, this statement may have been misunderstood. Myself, Gene, Mike, Eric and Jim are talking and when talks are complete a statement will be given. We will know more in the months to come. We will let you know as it unravels.”

The reunited Dark Angel are set to play at Keep It True XVII festival in Germany in April 2014.