Damon Johnson takes Radial on the road with Thin Lizzy 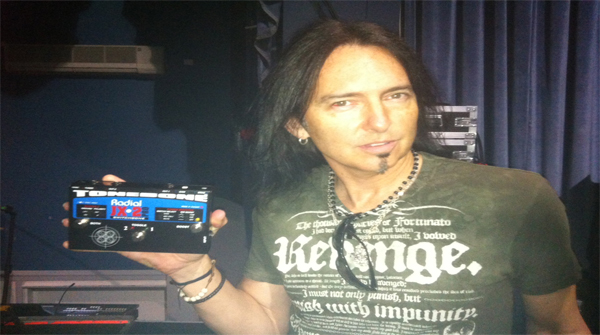 Damon Johnson takes Radial on the road with Thin Lizzy -

Few musicians will ever get the opportunity to tour with one of the bands that had the most influence on them as a young player. Damon Johnson is living his dream! He is currently on tour with Thin Lizzy playing dates all over the world for the better part of 2012. To take the gig Johnson took leave from his 7 year ongoing work with Alice Cooper.

According to Johnson this is a dream come true. "Quite literally, the music of Thin Lizzy is the single greatest influence on my own songwriting and guitar playing. I saw the original band as a kid in 1979 and it changed my life. For me to be asked to play with Lizzy is an unfathomable event...I'm still somewhat in shock about it!"

One piece of gear Johnson is not leaving behind is his Radial Switchbone (AB-Y Switcher). "The Switchbone is an absolutely vital addition to my signal chain. With Thin Lizzy (as I did in Alice Cooper), I'm running two Wizard amps simultaneously...each head into it's own separate speaker cabinet. The Switchbone corrects the loading that occurs when you run two heads via a generic splitter of some kind. And another huge feature for me is the ability to reverse the phasing of the amps if the need presents itself by simply engaging the polarity switch on the top of the pedal. And finally, with the added bonus of a gain and mid boost, the Switchbone is the greatest piece of pedal circuitry that I've EVER used...hands down!!"

The Radial Switchbone employs the same Class-A circuit as the critically acclaimed Radial JD7 Injector for exceptional audio performance. The unique DragT control provides single-knob load correction to re-introduce the natural relationship between the amp and guitar pickup that is invariably lost when the guitar is buffered or split to drive two amps. To eliminate hum and buzz caused by ground loops, the Switchbone's second output is transformer equipped for 100% isolation while a 180º polarity reverse switch keeps both amps in phase.