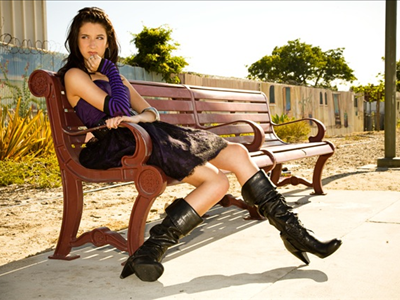 With a passion for music from when she was just five yearsold, Texas-born Brooklyn Hayley recently moved to California tofurther pursue her music career. With the help of extensive vocaltraining from renowned vocal coach  NicholasCooper, her management team at Parimore Management, and theunconditional love and support of her family, Brooklyn's musiccareer has exploded. Within the first year of moving to California,she co-wrote and recorded five original songs with Grammyaward-winning producer  AlexCantrall and  Jeff Hoeppner ofRadio Nation.

Of these five songs, her hit song "Record NRock" was featured in the forthcoming multi-console videogame, Dance Wars. In 2011, she embarked on the seven-city,five-state "No Bully Tour," featuring a mixture ofRadio Disney and Nickelodeon stars to send a strong anti-bullyingmessage to teens. Her incredible performances and participation ledBrooklyn to features on major networks including CBS, NBC, andABC.

Brooklyn has performed all over southern California in suchfamous venues as the Whisky a Go-Go and the Nokia Theatre LA Live,as well as the Hard Rock Hotel and Casino in Las Vegas, and theLA/Las Vegas Improv. Additionally, she has opened for great actssuch as Alyson Stoner, Earth Wind & Fire, and GretchenBonaduce. Apart from her numerous performances and showcases,Brooklyn has also performed at special benefit concerts held by LosAngeles Mayor Antonio Villaraigosa.

Brooklyn began work on her latest album lastyear with Eddie Galan, the Platinum-selling producer, along withthe music video for her song "Crash," slated to bereleased later this year. She also recently won "Best Teen Song"for her hit song "Boomerang" at the 2012 Indie MusicChannel Awards. Currently, Brooklyn is developing a reality showwith Nick Cannon to be called In the Heart of Brooklyn, which isscheduled to appear in several cities both in the US and abroad in2012.
"I don't think you can shake your thang on the dancefloor without Brooklyn's music blaring and making everything shake!Girl, the night IS young! Welcome to the Daisy Rock family -everybody's dancing over here and glad you have joined ourparty" says  Tish Ciravolo, President andFounder of Daisy Rock Girl Guitars.

Daisy Rock Girl Guitars offers a complete line of qualitygirl guitars designed to look and sound great, and to fit thefemale form. For more info, or to find a dealer near you,visit  Daisyrock.com.